The long wait is over!  The AXE Apollo National Challenge had just concluded last August 31, 2013 and the top two contenders had emerged (and I’m not one of them if you’re wondering :D).  They will be sent to train at the international AXE Apollo Space Camp in the US, but wait!  Did you know that a third slot is still open? 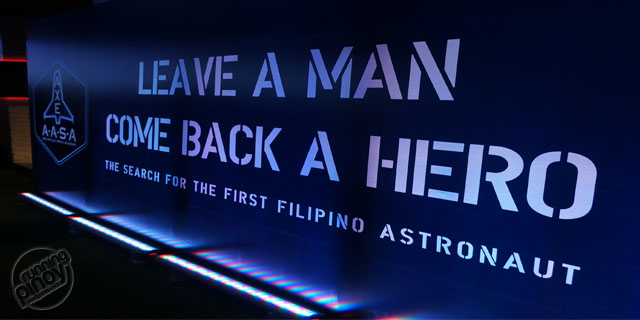 The search for the first Filipino astronaut continues.  From over 28,000 applicants, 400 of the AXE Apollo Space Academy (AASA) Philippines’ best battled it out at the AXE Apollo National Challenge, which happened last August 31st at Bonifacio Global City.  The two winners of the rigorous trials will be sent to train at the international AXE Apollo Space Camp in the US to prepare for the possibility of being sent to space.

The two AXE Apollo National Challenge winners will be joined by a 3rd candidate to be picked via an electronic raffle promo called the AXE Hyperdrive Promo, which gives every purchase of an AXE Apollo body spray a chance to win the last seat to Space Camp.  The three candidates from the Philippines will experience astronaut training in the US this December together with over a hundred other candidates from all over the world.

“It’s been over 7 months since we started this nationwide search for the first Pinoy astronaut.  Now that we are down to the Top 400, I think it’s really starting to sink in that pretty soon we will be sending one of these people to space,” says AXE Philippines Brand Manager Gem Laforteza.

A total of twenty three tickets to space are at stake, one of which is certain to go to a candidate from the Philippines making this person the first Filipino astronaut.

“I’m proud to have been involved in the selection process for the first Filipino astronaut.  Naniniwala talaga ako na talentado ang mga Pinoy.  We deserve this opportunity.  And that’s why we’ve tried our best to make sure that whoever gets it really deserves the one-in-a-hundred-million chance to go to space,” says AXE Apollo National Selection Director Luis Manzano.

A test to find the space-worthy Pinoy

The AXE Apollo National Challenges, organized by Axe and cable channel AXN, tested the candidates’ skill, determination, and what AXE calls the “Hero-factor.”  The first challenge was done in virtual space where over 4,000 of the top-voted candidates were invited to take an online test designed to select the top 400 applicants based on their intellectual prowess.  The next challenge involved a rigorous test of physical fitness with the candidates undergoing a military-inspired obstacle course, from which the top 50 hopefuls emerged.  Lastly, the candidates were asked to stand on pegs in a challenge called “the last hero standing,” a gruelling test of willpower designed to select the most determined candidates, the final two who will finally be sent to Space Camp.

“I think anyone would be happy with making it to the Top 3 who will be sent to the US for astronaut training.  Even if you don’t make it to space, Space Camp is still a once-in-a-lifetime experience.  Pero siyempre, iba pa rin ‘yung masasabi mo na nag-bakasyon ka sa space,” says AXE Apollo National Selection Director Sam Gogna of the Boys Night Out.

The two winners from the Challenges were announced by AASA National Selections Directors Luis Manzano, Gino Quillamor, Sam Gogna, and Ramon Bautista right after the event in a press conference held by AXE Philippines.  The two candidates await the announcement of their third compatriot who will complete the Filipino delegation to Space Camp in Florida.

Log on to www.AxeApollo.com or the AXE Philippines Facebook page for more details about the search for the first Filipino astronaut.

Now I am really envious.  When I was a small kid I only had one answer whenever I’m asked what I’d like to be when I grow up—to be an astronaut!  The thought of riding a space shuttle, floating in space, the possibility of going to the moon and beyond—well you get the idea.  But as much as I envy that one of them will actually go to space, I wouldn’t want to fill in their shoes as being an astronaut is more than just a status symbol.  Not only do they have to be physically fit to endure the challenges their mission might mandate, they also have to mentally and emotionally prepared!  Knowing what they went through at the AXE Apollo National Challenge and still besting all the rest, I know the Philippines is well represented.  Make us proud guys and Congratulations!  The Philippine flag will now be seen in space! 😀