One of the most famous lechon brands of Cebu, Zubuchon, has finally arrived in Metro Manila with its first branch located in San Antonio, Makati City.  But is it worth the hype, or just a fad?

I didn’t realize how long it’s been since I’ve last been to Cebu and the last time I’ve tasted Zubuchon until I found my post about it way back 2012.  No wonder I’m subconsciously coercing the universe to make things happen and lead me to their first Metro Manila branch!  And it did happen when me and my co-workers just thought of eating there for dinner.  I think we were all tired and hungry at the time so the decision to eat here went as smooth as hot knife through butter.

I was actually surprised to see how spacious Zubuchon Makati is.  They have a good number of tables and since we arrived a bit early for dinner, we had no problems getting seated.  And I really like how high their ceiling is and their good lighting.  Upon seating, we were presented with their magazine-like menu.

I love restaurants in Cebu because not only do they serve ridiculously delicious food, they also put in unbelievably reasonable prices.  When I first saw Zubuchon Makati’s menu, I definitely realized that I’m not in Cebu!  Still, the portions looked big enough for sharing and within my definition (albeit higher end) of reasonable pricing.

I was thinking of lechon, kinilaw, and kamias shake before we even got to Zubuchon and that’s exactly what we got, and some added items on the side like rice, ensaladang talong (eggplant salad), and of course, desserts!

The skin of the lechon is on the firmer side of crisp yet still so crunchy you won’t have a hard time biting it.  The meat is so flavorful on its own, true to the “sauce-less” nature of Cebu lechon.  I don’t remember how Zubuchon tasted like in Cebu, but the one from Makati is, on its own right, absolutely delightful!  I also tried it with some vinegar and condiments and it’s a match made in heaven!  You can’t lose either way!  A medium serving of the boneless lechon costs ₱590 and is good enough for four.

On to the sides!  The kinilaw (₱260) is very, very good as well.  It’s as good as I had imagined it from a picture of it on their social media account.  You may choose between tuna and tangigue (Acanthocybium solandri) variants, and we chose the latter.  From the sizes of the cuts, to the taste, to the serving size—excellent!

The ensaladang talong (₱130) or eggplant salad is pretty simple but the ratio of the tomatoes and onions and whatever they placed in it made it quite pleasant and a very good complement to all the meat that we’ve been eating.  Not much you can do with an eggplant but nonetheless, this is still a good dish.

The kamias (Averrhoa bilimbi) shake (₱100) may sound exotic but it did not disappoint!  It has that sweet and sour taste that I think goes well with the oily lechon that we’re having, but that paper straw is such a hassle and a really stupid idea (and also bad to the environment) as it disintegrates before you finish your drink.  Anyway, this is one of their specialty drinks and I recommend it for those with more adventurous taste buds!

Finally, the dessert platter (₱230).  This one did not meet our expectations as the menu suggested.  It’s supposed to be a sampler of some of their dessert offerings that is good enough for three to four people but when it arrived, we all realized that that is a disappointing exaggeration (unless all four of you are on a diet).  The dessert platter contained just one of budbud kabug sliced into two, a small piece of biko, a small serving of leche flan, and two cheeks of mango.  While I find everything in this plate quite good, the portion is just ridiculous for four grown men (even for three!).  It’s more like a teaser rather than a sampler and I’d suggest getting an ala carte order of each dessert you fancy.  Saves you the trouble on how to partition that mango equally!

In the end, I felt like I went to heaven after eating all these meals!  I have not enjoyed dinner this much in a very long time prior to this visit to Zubuchon.  It could’ve been because I was hungry, or I just missed lechon, or something else, but whatever it is I really loved the food here.  Serving time is not that long and the service is good plus they also accept credit cards.  I have zero complaints and I’ll definitely be back to sample more of their dishes.  Zubuchon, I’m glad you’re now here! 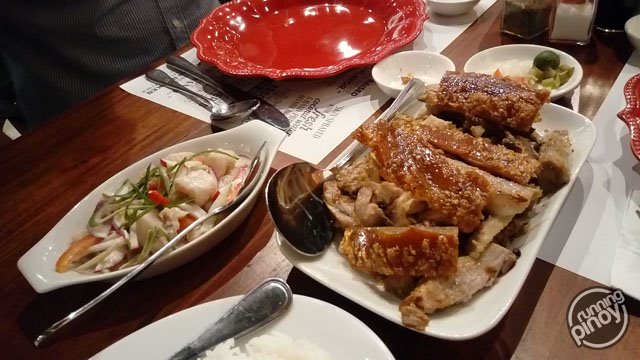