Avon Philippines is teaming up with Color Manila for the Pink Light Night Run and Walk for Breast Cancer 2019 to raise awareness on the disease.  Here are more information about this event:

Breast cancer remains one of the top causes of death among Filipinas.  In fact, according to the Philippine Council for Health Research and Development, 1 in 13 Filipinas will develop breast cancer in her lifetime.

With the Philippine Obstetrical and Gynecological Society also reporting data (February 2017) that shows the Philippines having the highest prevalence of breast cancer among 197 countries, the need to educate women on the importance of early detection as the best way to beat the disease is as urgent as ever.

Avon Philippines believes that no woman should be left in the dark about breast cancer any longer.  As the leading corporate supporter of the cause, the company is teaming up with Color Manila for the Pink Light Night Run and Walk for Breast Cancer 2019 to raise awareness on the disease, and the breast self-exam as the surest means to detect it early.

The Pink Light Night Run and Walk for Breast Cancer, happening on October 19, Saturday, at the Filinvest City Event Grounds, marks the return of Avon’s signature Run and Walk, the annual initiative that many cause supporters have participated in through the years.

This is also the first time ever that it will be a night run and walk event with participants going through a fun course while getting caked in bright pink powder along the way.

“Avon continues to shed a bigger, brighter light on breast cancer every year,” said Razvan Diratian, General Manager, Avon Philippines.  “It’s part of our DNA as the company that advocates and supports vital issues affecting women, and one of our top causes is breast cancer awareness.”

Diratian pointed out that after conducting a global survey in 2017, Avon found that there was a knowledge gap among women about the symptoms of breast cancer and how to lower the risk of developing the disease.  “This was how the Avon Breast Cancer Promise was born, making sure that every woman is aware about the disease and how to fight it.  We’re using the pink light to remind women to make the breast self-exam a habit for the early detection of the disease,” he concluded.

Jay Em, Color Manila President, shared, “We’re very proud to be partnering with Avon to underline an important issue everyone should be concerned about.  Color Manila is eager to inject the fun and vibrancy it’s known for into the Pink Light Night Run and Walk, and get more people to actively support a worthwhile cause in an enjoyable and exciting way.”

Everybody who joins the Pink Light Night Run and Walk event will be donating and providing assistance to the Philippine Cancer Society, Avon’s long-time partner in its fight against breast cancer.

One of the fruits of this partnership has been the creation of the Avon-Philippine General Hospital Breast Care Center, which provides health care and assistance to approximately 150 women a day—offering free breast health guidance, consultation, and check-ups.

“We’ve always cherished our relationship with Avon,” said Dr. Rachael Rosario, Executive Director, Philippine Cancer Society.  “They have been a constant and committed partner in our advocacy, and instrumental in establishing the Breast Care Center in PGH which has helped save many women’s lives and continues to serve even more.”

After lighting up several landmarks such as Manila City Hall, SM MOA Globe, Quezon City Memorial, and Avon EDSA Branch in pink last year, Avon is inviting everyone to become the pink light themselves to help remind Filipinos to know the risks, see the signs, and take action when it comes to breast cancer.

Join the Avon Pink Light Night Run and Walk for Breast Cancer by running in either the 3K, 5K, or 10K distances.

Participants can also choose from different race kit packages that all come with a special Pink Light head lamp to guide runners through the night. 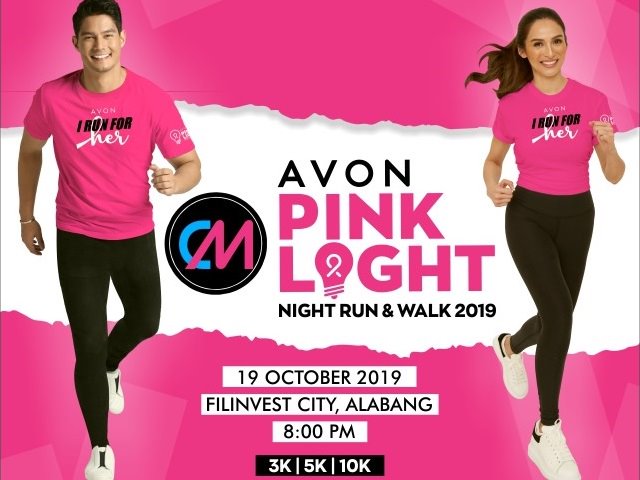