Acea Subic Bay was teeming with action so early in the morning as both participants and spectators alike eagerly awaited the start of one of the biggest sporting event in the country this year.  The atmosphere was both competitive and inspiring at the same time as pros from all over the world graced the event along with first timers aiming to complete their first Ironman 70.3.  And at 6:27AM, the Male Pros, Filipino Elites, and CEOs were off to officially begin the event.  They were soon followed by the Female Pros and Female Filipino Elites, and later by the age groupers and relay participants.

Newly introduced with this particular Ironman 70.3 event is the rolling gun start for age groupers and relay participants.  This means that participants are released in batches a few minutes apart instead of everyone starting at the same time.  Timing chips are in use along the course so timing is individually done and not based on gun start.  Not only that this makes for a more organized start, it also improves safety as swimmers have more space apart.

It only took three hours, 48 minutes, and 56 seconds for Craig “Crowie” Alexander to complete 1.2 miles (1.9K) of swim, 56 miles (90K) of bike, and 13.1 miles (21.1K) of run under the scorching heat of Subic Bay.  He was followed less than two minutes later by Patrick Lange.  Rounding up the top three is former title holder of Ironman 70.3 Subic Bay and Philippines, Tim Reed.  August Benedicto was the fastest Filipino of the event, clocking in at four hours, 20 minutes, and 15 seconds.

The female pro category was dominated by Caroline “Xena” Steffen with a time of four hours, nine minutes, and 40 seconds.  She was followed five minutes later by Radka Vodičková of Czech Republic and coming in for third is Thailand-based Dimity-Lee Duke.  Monica Torres emerged as the Filipina champ, clocking in at four hours, 39 minutes, and 45 seconds. 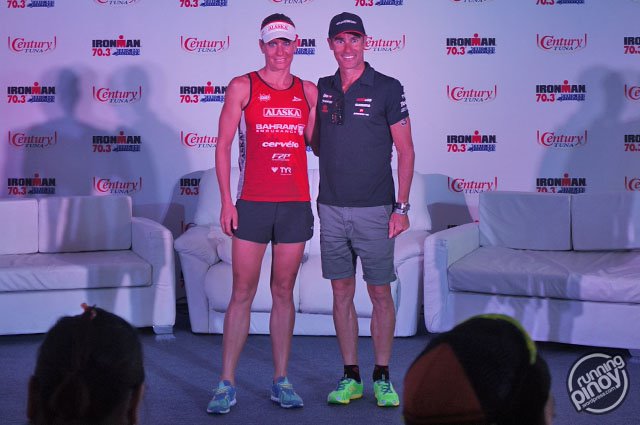