Ginza Bairin is one of the more recent additions to the Japanese franchise invasion of Manila and being a foodie, I shall not miss the chance to try their specialty tonkatsu.  I’ve also tried other variants of their teishoku (set meal), and here are my thoughts. 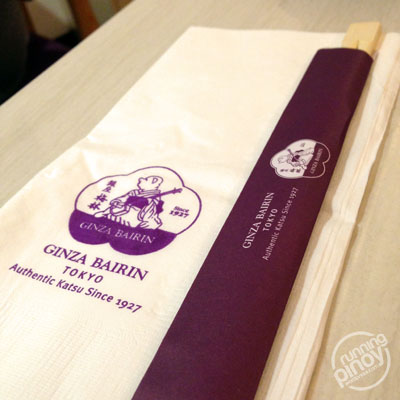 For my first visit to Ginza Bairin, I had their mixed set to get a chance to try a wider set of their katsu.  I had set C (₱445) which included hire (pork fillet), fish, and prawn.  And similarly with competition, each order of katsu set comes with unlimited Japanese rice, miso soup, fruits, cabbage salad, and Japanese pickles (tsukemono).  They also offer, in either hot or cold, Japanese brown rice tea (genmaicha) for free.  As salad dressing, they have the usual roasted sesame dressing and they have the wasabi shoyu dressing which I haven’t seen elsewhere.

The way Ginza Bairin presents their hire katsu is a bit unique because it’s much closer to the shape of a ball than a patty.  The slices are also a bit thicker and so is their layer of breading.  The fish katsu is also presented in a similar way (only a bit flatter) so you won’t be able to tell which is which unless you take a peek between the slices.

My second visit involved a more conservative order of chicken katsu set (₱315 for regular, ₱345 for large).  The shape is much more flat than the hire katsu, but the slices are still big.  And since this set is cheaper than its pork counterpart, I thought of having some gyoza as well.

Ginza Bairin’s katsu sauce is much more fluid than the competition so it’s easy to think that it’s not as good but it’s actually similar in terms of taste.  I would’ve preferred it thicker but it’s not much of a big deal since it’s still tasty.

In terms of serving, I noticed that the initial servings of rice were a bit small (based on my two visits).  The servings of the sesame seeds that you pound and mix together with the katsu sauce were also a bit small.  It doesn’t really matter since you can ask for another serving but for some who eats fast, it can break the initial momentum.  They also give you your next rice servings in new small bowls instead of refilling your existing bowl so eventually you’d have a stack of bowls on your table.  On the good side, you may be able to monitor how many cups of rice you’ve had, but on the bad side, everybody else also knows! 😀

Among the unlimited side dishes, there are two that I prefer to stuff myself with: first would be the fruits since you can’t really go wrong with fruits and I don’t think I get enough servings of it with my daily diet, and the second one would be the Japanese pickles which I admittedly am addicted to.  This is definitely one of Ginza Bairin’s “edge” over competition!

Overall, Ginza Bairin is a good place to stuff yourself without breaking the bank.  Unlimited refills on the side dishes, that addicting Japanese pickles, wide variety of options, and good food.  But I do think that the rice portions are a bit too small so if you love rice or eat a bit fast, you may have to ask two or more rice bowls!  Not much of a big deal though as chances are, you still have other items to work on while waiting for that refill!