Christmas is indeed in the air with the Philippines’ Financial District, Ayala Center, all glittering with lights and decors for the season.  And one of the area’s most popular attraction, The Festival of Lights, had returned to dazzle the young and adults alike.  Read on for a glimpse on what’s in store for this year.

Makati City is all set to blanket the city in a blaze of lights with a fantastic light and sounds display to welcome the holiday season—a grand spectacle you wouldn’t want to miss.

This year’s Festival of Lights at the Ayala Triangle Gardens, set to premiere on November 09, is both dazzling and upbeat with three shows to get everyone into the Christmas vibe.  Ayala Land, together with its co-presenter HSBC and partner Coca-Cola, presents the Festival of Lights every 30 minutes nightly, from 6PM to 10PM, until January 04, 2016.

“For five consecutive years, we have been giving world-class entertainment at Ayala Triangle Gardens that people have come to love and anticipate.  Now an annual tradition, the Lights and Sound show will continue to brighten the Christmas celebrations of Filipinos this year,” said Manny Blas II, Ayala Land Vice President and Project Development Head for Makati.

“More than the spectacle of lights, we have created a signature Makati attraction with the Ayala Triangle Gardens Lights and Sounds show that brings families, friends, and the whole community together, giving the perfect setting for holiday bonding and shared memorable experiences.”

This Festival of Lights finds itself in distinguished company with the likes of the Tivoli Gardens in Copenhagen, Denmark, the holiday lights display at the legendary Champs-Élysées in Paris and Japan’s Kobe Luminarie—that made the Conde Nast Traveller’s Seven Most Spectacular Lights in the World.

The spectacle is sure to get everyone into the holiday spirit as music fills the air and dancing lights transform the place into a Christmas wonderland.  Ushering the magic of Christmas and filling spectators with child-like wonder and awe, visitors can immerse themselves in this fairyland that combines futuristic lights with beloved Christmas medleys that are refreshingly rendered in different genres.  The theme of this year’s show series is Beats and Hues.

The Festival of Lights features favorite Christmas songs in three themes—taking the old classics and presenting these through new arrangements and musical ideas.  The first show takes us to the streets of New Orleans, fusing big band music with jazz tones into a festive Christmas medley.  The second showcases the rhythms of Africa, inspired by drum beats and musical instruments indigenous to the land, fusing modern and traditional African music.  The third, a mix of techno and electronic dance music, takes a modern feel and vibe to favorite Christmas carols.  Indeed, with the harmonious mix of diverse sounds and music, the Festival of Lights promises a refreshing new experience.

All around, the landscape is covered in a blaze of lights, with four full-color laser lights, and full-color LED string lights wrapped around the trees.  The Gardens are wrapped in pixel lights and decked with pixel spheres and meteor lights, covering the grounds in a canopy of colors that glisten as colored laser lights and sparkling flash pods create an almost ethereal effect.

The Festival of Lights is expertly directed by award-winning Voltaire de Jesus and Luther Gumia.  Musical score is by musically acclaimed musicians and composers Jazz Nicholas and Mikey Amistoso of Watusi Manila.

Take selfies in especially designated spots that would allow you to capture the magical background into your timeline.  Upload your photos on Instagram accounts using the hashtag #ATGFestivalofLights2015 and #MakeItHappenMakeItMakati to let everyone know.

From the gardens, one can admire the beautiful light installations replicating ten of the oldest and most historic Philippine Churches across the country.  Each one is bedecked in parols and thousands of lights that capture the magnificence of a traditional Christmas in the Philippines.  The street lights design is developed by the Makati Team together with designer Zenas Pineda.

“As the country’s premier city for business, lifestyle and entertainment, Makati prides itself in being the city where it all happens.  It is our intent to liven up and truly celebrate the Christmas season with the denizens of Makati by providing them with a traditional and inspiring Christmas experience,” said Mr. Blas.

The Festival of Lights runs daily from November 09 to January 04, every 30 minutes from 6PM to 10PM.  There will also be Thanksgiving Masses at the Ayala Triangle Gardens Fountain Area every 6PM from December 15-23.  The Makati Inter High School Christmas Caroling Competition will be on December 17 also at the Ayala Triangle.

For more holiday activities, head over to Circuit Makati, the newest and most dynamic entertainment enclave, where you will find the tallest Christmas Tree in Metro Manila.  With the spirit of gift-giving inspiring everyone, check out the biggest outdoor Christmas Bazaar, showcasing hundreds of merchants and amazing finds from November 27 to 29.

Christmas is indeed the season that never fails to delight even the busiest of people, who all anticipate and delight in Makati’s yearly holiday tradition.  Once again, Makati promises a memorable and delightful holiday festivities.

If you want to get into the holiday vibe, drop by the Festival of Lights at the Ayala Triangle Grounds for a spectacular way to celebrate the Christmas season.

This year’s show definitely outdid last year with three different themes and the use of more than a million LEDs with white lasers that can change into practically any color.  All these combined with fog effects and you get some sort of 3D lights that dances to the tune of music!  It’s a show that you have to experience for yourself as videos don’t give it justice.  Kudos to all the folks that made this fantastic show possible!

There have been some reports of cameras (mobile phones and SLRs alike) being permanently damaged by the lasers used in the show so as a precaution, keep some distance away from those laser machines and as much as possible avoid looking at it directly especially with your naked eyes. 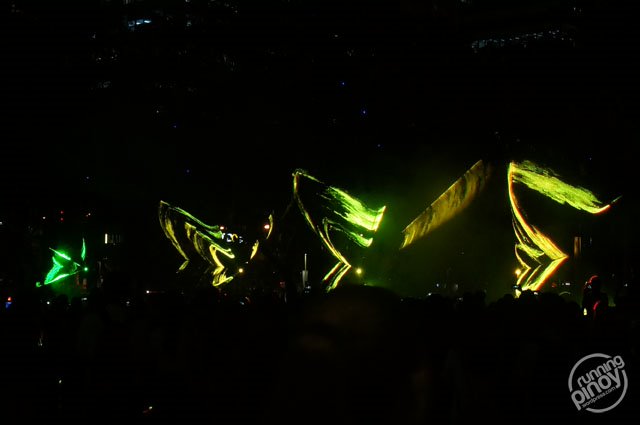