Triathlon is one of the sports that really fascinates me, and triathletes are some of the people that I really admire.  It’s hard enough to stick into one sport, yet they do it for three!

Whomever “invented” triathlon must be really bored.  One can spend hours swimming, biking, or running, but you don’t normally find another tiring thing to do after completing one.  It’s like looking for a game of basketball after playing badminton.  But triathlon does exactly that.  You swim a good distance, then you bike some more, and you run like it’s dessert in a meal.  Just thinking about it makes me tired!

The crazy part about triathlon is that there are triathletes!  And it seems to me like it’s one of the fastest growing sport in the country.  Many of my friends whom I started running 5K or 10K with are now into triathlons.  It seems like the “natural” progression for those who “graduated” from full marathons or ultra-marathons.

My mind had actually toyed with the idea of progressing to triathlon ever since I completed several full marathons and a few ultra-marathons.  I was even inspired by a friend who learned to swim just to join his dream event.  But all these motivations were not enough to push me (yet) into the sport.  One thing is holding me back—I’m not (yet) strong enough to fully commit to the sport.

Many of my friends who are now in triathlon belong to groups that encourage each other to train, among other things.  And together, I see them really making time, going out of their way, and making sacrifices just to be able to train—not just one, but all three disciplines of the sport.  Running, let alone training, isn’t really one of the things that I excel at lately and so when they say that they can’t join us for socials because of their training, I look at them like their superheroes dedicated to their cause.  It takes a strong will power to say “no” to something you want to do for something you have to do.  And so for now, while I’m still not as strongly-willed as they are, I’ll just happily cheer for them on the sidelines!

Despite the strong discipline needed to play the sport, I can see why many athletes are hooked, especially here in the Philippines.  The natural beauty of this country is just unbelievable!  I think we can all strongly agree that the Philippines can become a tourism powerhouse in the future!  I’ve been to the beaches of California on summer but my tropical tolerance finds the waters too cold for comfort.  Here in the Philippines, we enjoy perpetual summer so the waters remain comparatively warm throughout the year.  We’re also surrounded by the sea so there’s a beach practically everywhere!  So even when the first thing you do on the morning of your competition is to swim in open waters, at least you don’t have to worry about it being too cold!  And then there’s all these sport-friendly venues sprouting up all over the country, many of which are conducive to biking and running.  As a runner, I’m always glad to find new places to run, so I assume the feeling is mutual for cyclists, especially if the place is bike-friendly.

With the growing number of triathletes and their playground, would we still wonder why the Philippines is starting to become host for numerous international triathlon events?  One recent addition to the lineup of international triathlon franchises is the TRI-Factor, to be held on May 25, 2018 in Camarines Sur.  Their presence in the country is pretty recent, but they already chose to stage one of their Asian Championships here.  They are even planning beginner-friendly events next year.  Are they seeing something in the country and Filipinos?

Perhaps one testament that triathlon is great not only for the Philippines as a host but for Filipino triathletes as well was when Filipinos swept the 2017 SEA Games triathlon gold medal for both men and women.  As grueling as the sport may be, triathlon, surprisingly, isn’t that discriminating when it comes to gender, physique and especially age, as attested by the highly diverse elites.  Indeed, triathlon is a sport where we show a strong potential to earn that ever-elusive Olympic gold!

I believe that as a country, we’d really be a great host and we just need to invest in our infrastructure to have more venues capable of hosting big events.  As a people, this is one sport that I think we can really excel given that our elite athletes are already making their mark in the international scene.  I truly admire the dedication that each triathlete, especially the non-elites, puts in into this sport, given all the time and money it cost and no guaranteed return.  I applaud your discipline and I hope that the day soon come when I find myself strong enough to join them in one of these events.  Until then, keep doing what you’re doing!  See you from the sidelines! 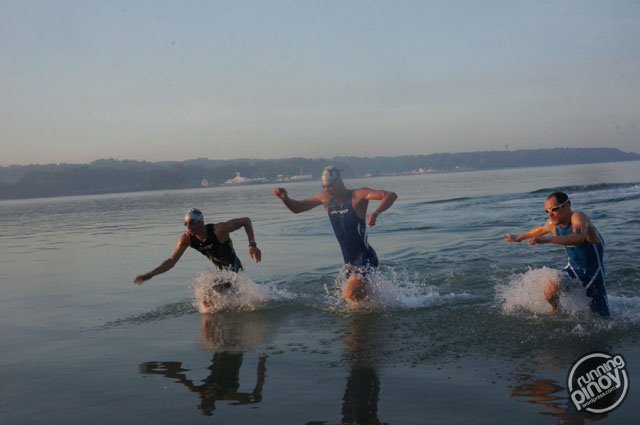