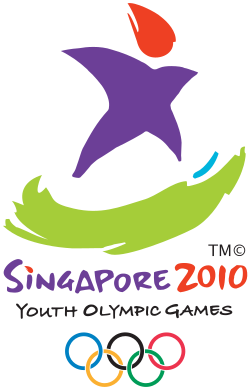 The song “I Gotta Feeling” by the Black Eyed Peas is a very memorable song for me as every time I hear it, it reminds me of a special occasion: last year’s Standard Chartered Singapore Marathon.  That was one of the songs playing before the marathon started and it was then that it stuck.  Last night it was again one of the preferred songs for the opening ceremonies of the inaugural Youth Olympic Games (YOG) in Singapore.

The Youth Olympic Games made me realize how lucky these young generations are as they have an Olympic Games just for them.  It also made me realize how old I am!  (I still am in my 20s but even a 19 year old would be over-aged for the Games!)  In these Games we’ll see future of the Olympic Games and this early on in these athletes lives they’d have a chance to compete with the best in their generation.  I hope that these Games became part of our overall sports program as our future Olympic Gold medalist may come from their ranks.

How I wish I was watching the opening ceremonies live, and not via satellite.  This may be the closest the Olympic Games will come to our doors anytime soon!  And for what it’s worth I really miss Singapore (and alas I’ve no scheduled trip to the island this year, any sponsors? :)).  As a runner of course I would love to watch the athletics particularly the 100m dash (sadly there is no marathon at the YOG :(), and as a Filipino I would’ve loved to cheer on our Pinoy athletes.  Since I can’t be there to see the games live I would just send out my cheers to you guys via cyberspace.  Team Philippines, GO! GO! GO! Do your best guys and gals, good luck!  Who knows, you may be the ones to bring home our first Olympic Gold medal!

The first Youth Olympic Games will be held in Singapore August 14-26, 2010 and is participated in by 3,531 athletes between 14 and 18 years of age from 204 countries.  The Philippines has a 10-athlete delegation.

I loved the concept of the opening games of the YOG that utilized the waters of the Marina Bay and the night lights of the Singapore skyline as background.  My favorite part was definitely the lighting of the Olympic Flames, from the first torch bearer in that Phoenix boat, to the relay, to that running on water, to that twisting flame. ■