I love coffee but I admit that I don’t really know much about it.  The recently concluded Starbucks Coffee Appreciation Festival gave me the chance to get to know more about one of my favorite beverages, and here are some of my key takeaways.

Starbucks Coffee Appreciation Festival was held from April 02-03, 2016 at the main atrium of Shangri-la Plaza Mall.  It was free of charge and it was a great opportunity to learn more about coffee.  There were various areas that focuses on different things and each one has at least one coffee expert whom you can ask questions.  And being naturally curious about coffee, my inquiries led me to some interesting information about coffee and Starbucks:

Enough of the beans, let’s go to preparation.  I’ve actually only recently started brewing my coffee at home using a coffee press so I’m naturally curious if there are other possibly better alternatives to getting the most out of these precious beans.  Fortunately, there were home brewing demonstrations for both pour-over and coffee presses so I was able to compare both methods:

This method is as simple as it gets: you have a coffee filter, you place your coffee beans in it, and you pour over off boiling water.  The only thing you have to consider here is the grind of your beans which should be fine, not coarse and also not too fine.

This method of course needs a coffee press where you put in your coffee beans and off-boiling water.  Once they’re in you just give them a stir and wait to four minutes before you push that plunger and serve.  One thing to note is that you need to grind your coffee coarse as fine grind would slip into the screen.

For the more technical aspect of home brewing, let’s start with the water.  Your water should of course be clean and filtered for impurities.  In terms of temperature, it should be off-boiling.  You get to this temperature by letting a newly boiled water sit for about four minutes.

We then get to the proportion: the suggested values are 10 grams (or two tablespoons) of grounded coffee for every 180 mL of water, both for pour-over and coffee presses.

For storage, you should store your coffee beans in an airtight and opaque container.  Keep your beans away from heat and direct sunlight and at room temperature (don’t put them in the refrigerator!).  And once opened from their packaging, consume it within the week.  That means if you don’t consume a lot you should probably buy them in smaller packs.

Finally, the espresso.  Actually, I didn’t get to know much more about espressos beyond what’s written in the poster shown below as this section was either packed or the machine being re-calibrated.  Nonetheless, I saw some participants being taught by the barista on how to do those patterns you see on top of your lattes and also had some lattes for tasting.

Speaking of tasting, I also visited two more sections explaining the flavors of coffee, Colombia and Caffé Verona in particular.  Colombia is of course from the country of the same name and what we sampled were medium roast and it apparently goes really well with nuts!  Caffé Verona on the other hand comes from Verona, Italy, where the story of Romeo and Juliet was set.  It was a dark roast and it really went well with dark chocolate which was quite surprising—dark on dark.

It was in this section where we were taught how to appreciate coffee.  First is to smell its aroma by covering your cup of coffee and smelling it.  A significant portion of how we perceive taste is from our smell so the more you smell, the more you taste.  Then, we were taught how to drink.  You should drink your coffee by slurping it like a soup and with sound!  Our barista even mentioned that louder is better!  Anyway, the concept here is to introduce air with our gulp thus reducing the concentration of heat that may burn your tongue and also to get more of its scent as well.

Aside from all the learnings and all the different coffee types that we tasted, related merchandise were also on offer aside from the beans themselves.  They were offered on discounts but unfortunately for me, their coffee presses were all sold out (as I was planning to get another one for my personal use at the office) and the small ones that I got to personally use at the coffee press demo are no longer sold.

I actually did not expect to learn so much with just one brief visit to the Starbucks Coffee Appreciation Festival.  I highly recommend this initiative by Starbucks Philippines not only to coffee aficionados but to anyone who’d like to learn more about coffee.  Grab the opportunity when the next one comes along, whenever and wherever that is!

To Starbucks Philippines, thank you for making me appreciate my cup of coffee even more!  Thank you to your team as well for sharing their skills and knowledge, and also, thank you for the coffee! 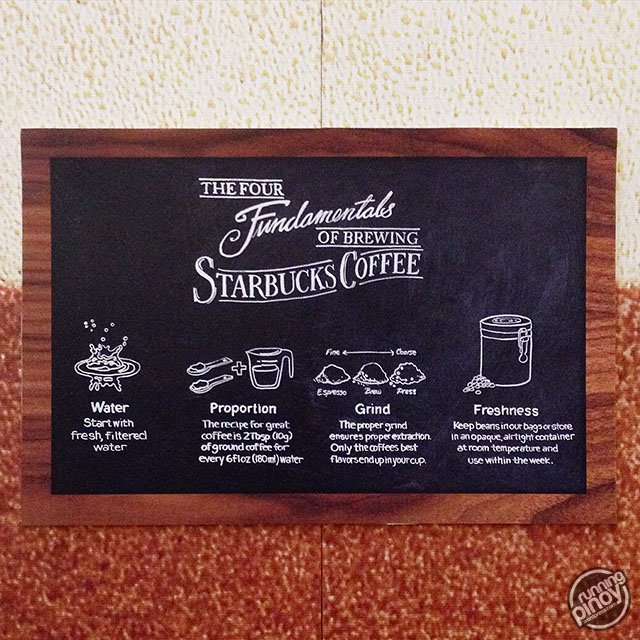