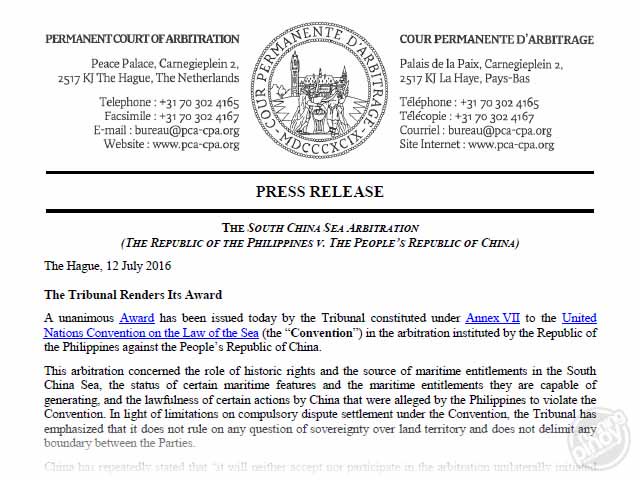 It’s a good time for the Philippines and all law-abiding countries of the world as we demonstrated that international disputes may be resolved in a civilized, non-violent way by the rule of law.  Making sovereign states comply with the arbitration is a different thing but in the eyes of the international community, we are on the right side of international law.

Here are some key points from the press release from the Permanent Court of Arbitration (PCA):

Historic Rights and the ‘Nine-Dash Line’

The Tribunal concluded that there was no legal basis for China to claim historic rights to resources within the sea areas falling within the ‘nine-dash line’.

The Tribunal considered the effect on the marine environment of China’s recent large-scale land reclamation and construction of artificial islands at seven features in the Spratly Islands and found that China had caused severe harm to the coral reef environment and violated its obligation to preserve and protect fragile ecosystems and the habitat of depleted, threatened, or endangered species.

The Tribunal found, however, that China’s recent large-scale land reclamation and construction of artificial islands was incompatible with the obligations on a State during dispute resolution proceedings, insofar as China has inflicted irreparable harm to the marine environment, built a large artificial island in the Philippines’ exclusive economic zone, and destroyed evidence of the natural condition of features in the South China Sea that formed part of the Parties’ dispute.

You may get the complete copy of this press release and the details of the Award here.

The Permanent Court of Arbitration, established by treaty in 1899, is an intergovernmental organization providing a variety of dispute resolution services to the international community.

“KALAYAAN” is a three-part documentary series on the West Philippine Sea (WPS) produced by the Department of Foreign Affairs (DFA), in partnership with Presidential Communications Operations Office (PCOO). Each episode focuses on a different angle of the issue: economic, historical and legal.  The documentary is part of the nationwide Information, Education and Communication (IEC) campaign of the DFA to increase the level of public awareness and understanding of the issues relating to the West Philippine Sea.  The documentary is directed by RA Rivera, Jr. and hosted by Lourd de Veyra, together with Jun Sabayton. (via dfa.gov.ph)