Eventually, our last day in paradise had come.  There were so many things I still wanted to do, but it’s time to wrap things up.

First things first, a quick visit to Real Coffee and Tea Café, home of one of my all-time favorite Boracay treats, the calamansi muffin.  As I wouldn’t have much time to enjoy it while in the island, I’m just taking a piece of the island home with me.  And as you expect, I just ran and walked to the store from our hotel, enjoying the fine sands one last time.

As soon as I got my goods, I hurriedly went back to our hotel to enjoy our breakfast buffet.  As much as I was tempted to take some laps one last time, I sadly didn’t have any time to spare.

And so after packing our bags and settling everything with our hotel, we were off to the port.  We had asked our hotel to call us a tricycle to pick us up from the lobby for convenience.

Unfortunately, the driver of the tricycle that our hotel called was anything but professional.  He actually stopped over his house along the road for several minutes without asking us first if we’re in a hurry!  I mean he just stopped when we reached his house, left us in his tricycle without telling us anything, got inside his house and went back several minutes later with no explanation whatsoever!  He’s one of the two rude tricycle drivers on the island that we had to deal with which gives tourists very bad impression on the locals.

So after the unnecessarily long trip we eventually reached the port.  We were quite thankful that we checked out early and our airport is just across the island in Caticlan so we were not pressed for time.  And since we got ourselves roundtrip boat and tricycle tickets (Boracay Island to Boracay Airport and vice versa), it was hassle-free from this point onwards.  The boat departed all the time from the port as soon as they’re filled and the tricycle terminal is just across the exit.  The tricycle drops you directly at the entrance of the airport.

Godofredo P. Ramos Airport, formerly called Caticlan Airport but is now officially Boracay Airport, is one of the smallest airports I’ve ever seen but it had improved a lot since I last saw it (with the former terminal).  It’s now fully air-conditioned and has a second level to accommodate more passengers.  There are also souvenirs and food vendors here but selection is very few so I advise bringing your own food if you think you’d get hungry.

As expected with any flights going to Manila, our flight (along with every flight ahead of us) was delayed.  With several flights stranded in this tiny airport, it was only a matter of time until it became so crowded that there’s hardly any room to even walk!  What’s worse was that whomever was manning the flight information screen was not doing his/her job.  First, we were told to go to the gate (which we did) and so we lost our seats and had to squeeze through the crowd only to be told that our flight was delayed.  Thankfully there were some seats left at the second floor when we returned, but then they started boarding minutes later with no announcement whatsoever!  I was thankful that one in our grouped noticed people boarding the plane downstairs and assumed that that’s already our plane (which it turned out it was!).  I don’t know if it’s the responsibility of Boracay Airport or Philippine Airlines, but that’s not a good impression to take upon leaving Boracay!

And just as you thought your ordeal to return home is over, you had to deal with a plane with a barely functioning air-conditioning.  It was 30°c inside the plane, no kidding!  It only felt a bit less hot once we were airborne.  Yes, Philippine Airlines, the flight delay back to Manila is not your fault, but sending a plane with a faulty air-conditioning is!  And I thought flying to Boracay via Caticlan would be more pleasant than via Kalibo.  Anyway, there are two other airlines flying the same route and so maybe we’ll try the other one on our return, the one that actually uses a jet engine instead of a propeller-type one with a barely-functioning air-conditioning.

More than an hour after our originally scheduled arrival time, we were back in Manila.  I’m glad that for a change we found a decent taxi driver who took us out of the chaotic airport.  Regardless of our ordeal, it’s always a nice feeling to be back home!  And I have some calamansi muffins to enjoy! 😀 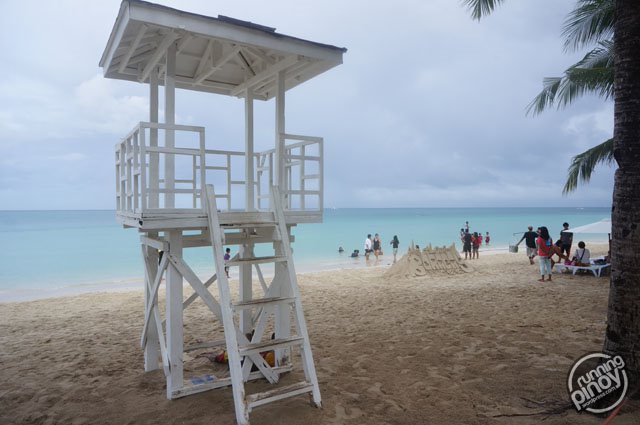