It’s already the middle of February but I’ve only had my first race of the year with the 6th AmCham ScholaRun.  This isn’t by all means a major race and I can’t say I prepared for it, but it opened my year on a good note.  Here’s my recap.

This year’s AmCham ScholaRun was held at the SM Mall of Asia Complex with the starting line near the Esplanade Seaside Terminal.  As I was coming in by bus, it meant an extra 2K walk from where my bus stops to the starting area.  I was quite anxious when I alighted the bus as I’m uncertain if I could arrive on time so that 2K head start became my warmup, walking and running as needed to arrive the soonest without spending too much energy.  And I did arrive at the starting area with minutes to spare—only to get stuck at the baggage area.

And so I started just before the gun start of the 3K.  And as if starting late wasn’t enough, I had technical issues starting GPS tracking on my Fitbit Charge 2!  I had started Endomondo before crossing the starting line though so I had a fallback.  I finally was able to get my Fitbit working a few minutes later.  Good thing that this is one of those events that I’m not racing for a personal best.

As always, starting late is a challenge as you begin with the bulk of runners ahead of you.  Both 5K and 10K runners lie ahead so I had to weave through the crowd to get through.  I think that my unplanned warmup worked well for me as I actually completed my first kilometer, despite the crowds, in under 5 minutes!

I wasn’t really feeling anything bad after my first kilometer so I just sustained my pace.  I wanted to test how long I can keep this sub-5 minute pace as I’ve not run at this speed in a very long time!  Given that I wasn’t really training for anything I knew that soon enough I’ll be hitting a 5-minute kilometer, and then slower from there.  But then the third kilometer came, and then I’m already on my way back, and I’m still averaging less than 5 minutes per kilometer!  This is interesting, I thought.

And then there it was, the finish line… I think I’m the only one at the time crossing the 5K lane.  It was reading past 28 minutes (gun start) so I didn’t have an idea how I did.  But when I stopped Endomondo and my Fitbit, I realized that I actually completed in under 25 minutes!  That’s a nice surprise!  My timing wasn’t that accurate because of my technical issues when I started but it was 22 minutes++ on my watch.

After crossing the finish, I got myself busy with fetching my bag from the baggage area (which took much longer than checking it in as they didn’t have a system of quickly finding the bags deposited), eating breakfast, and taking some photos.  It also started raining so I only had a handful of shots.  That rain came at the worst time and as there’s hardly any shelter in the area, discouraged a lot of people from staying for the awarding ceremonies (myself included).  And so after a lone group photo with co-workers that also joined the race, we all went our own separate ways.

It might be a wet day but my spirits were anything but dampen!  I’ve far exceeded my expectations of doing a 25-30 minute 5K without really consciously thinking about the time (officially 22:53, chip time).  It’s a great way to start the year!

To all the finishers, congratulations!  You may view the official race results here. 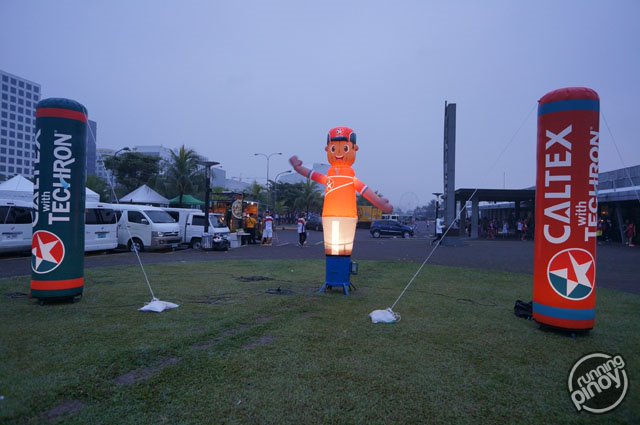