Do you know that pedestrian overpass that links Ninoy Aquino International Airport Terminal 3 with Newport City?  Well, it has a name and it’s called Runway Manila and it’s now open!  I had the chance to use it early this week and here’s my experience.

Because of difficulties in getting to Manila’s airport terminals, particularly Terminal 3, I had developed a habit of checking-in into properties across the terminal if my flight falls on rush hour.  But anyone who had tried to cross Andrews Ave. to get to the airport from Newport City would tell you, it is a huge challenge as drivers won’t yield to pedestrians.  Imagine doing that while hauling along some heavy luggage.  The opening of the ₱1.5 billion (about $30 million) Runway Manila is great news as you can now get across safer, more conveniently!

The entry to Runway Manila from the Newport City side can be found near E Palm Dr.  Just as you enter the door, you’re greeted by an x-ray scanner reminding you that you’re now entering the airport premises.  From here, you have nowhere to go but up and that’s via the elevators.  We were hauling some huge and heavy luggage so it’s a huge relief!  We also appreciated the air conditioning while we waited for the elevator doors to open.

The elevator opened into this wide, modern, and cool passageway.  There were still some things lying around but since they only opened recently, that’s understandable.

We just followed the hallway and we eventually ended up to this area that goes down to the airport grade.  Moving walkways are installed on the sides but we didn’t use it as we’re going downwards and gravity is helping us with our luggage.

Another x-ray machine greeted us upon entry to Terminal 3 which made me wonder if there are other entrances to Runway Manila to justify the redundancy.  And continuing on, we ended up at the terminal’s food hall.  That’s where the challenge started.

No signs.  You’d expect that the most modern Manila airport terminal would have signs to the nearest elevator, but that’s not the case.  I guess Runway Manila is so new that nobody thought of putting signs (yet) on where to go once you’re in.  Once we found the elevators leading to the airline counters a floor below after asking around, they don’t work!  There are only two buttons on the elevator, “3” and “4,” and since we’re going down, logic would dictate that you’d press “3.”  But doing so did not take us anywhere.  The door closed, and then it opened on the same floor.  We tried again.  Same result.  Unfortunately, all escalators going down were turned off so we had to haul our heavy luggage down the stairs.  The non-functioning air conditioning at the terminal at the time didn’t help.  You could just imagine how ashamed I felt because this is supposed to be “the best” airport we have in Manila.  And then they have the audacity to charge you ₱1,620 for travel tax (applicable to Philippine passport holders only).

Don’t get me wrong, Runway Manila is a great addition to NAIA T3 as it provides safe and convenient way to get to Newport City and vice versa.  They have elevators, moving walkways, good air conditioning and using it is free!  It’s just extremely disappointing that NAIA Terminal 3 didn’t do their part to make the experience seamless.  Nonetheless, I’m very grateful that Runway Manila is here! 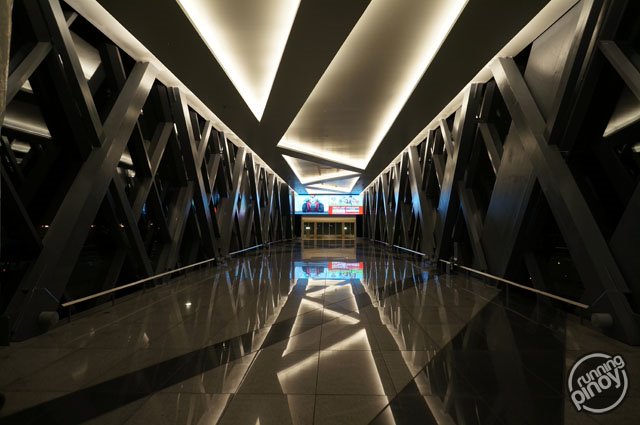