If you’ve seen Bonifacio Global City’s development for the past few years you’ve seen how fast former open spaces have been lost to development, but thankfully BGC is giving back some of those lost grounds with its newest playgrounds: Terra 28th and Track 30th. 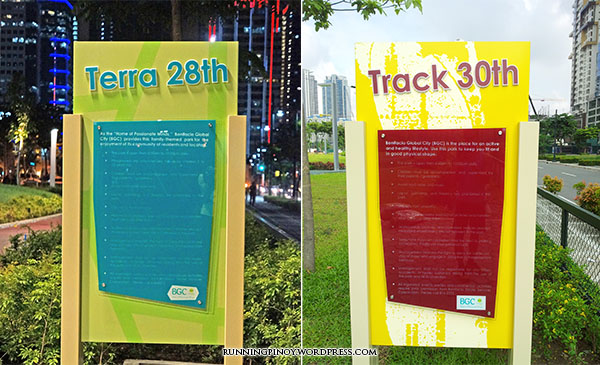 Terra 28th is a “real” playground for kids located along 28th St. with the usual seesaw and swing installations.  I just got to applaud BGC for going further by allocating space for some traditional Filipino games like Patintero, Piko, Luksong Baka, etc.  I just hope though that many still know how to play these games we enjoyed during our childhood (or else we may have to do some clinics :D).

For those who are not quite as young, there are also jogging paths within the area.  There’s just not much shade in the area during the day but it’s well lit until around 10PM so guess it is best visited early in the morning or late in the afternoon.

In case you’re curious, the main jogging path is a loop of about 310m (via GPS), but if you’re bored you may also take on all the other side paths so doing a kilometer (or more) isn’t that bad.

Terra 28th is opened from 6AM to 10PM just east of Bonifacio High Street.  It is not fully enclosed so you may visit anytime, but lights are turned off at around 10PM.

Track 30th was a pleasant surprise when I first saw it along 30th St.  It’s basically Terra 28th’s counterpart on the other side of Bonifacio High Street, and like its name implies, is basically a “track.”  Could this be Bonifacio Global City’s subtle hint to runners to move out of BHS’s sidewalks?

Terra 30th may look dull at first but it does have its own “playground.”

Like Terra 28th, Track 30th is open from 6AM to 10PM daily.  Skateboards, bikes, and motorized vehicles (except motorized wheelchairs) are not allowed in the park, although may lock your bike in the area while you jog.