Merry Christmas everyone!  One of the happiest seasons of the year is here, and because of this I thought of fast-forwarding this chronicle to our day at the “happiest place” on Earth, Disneyland! 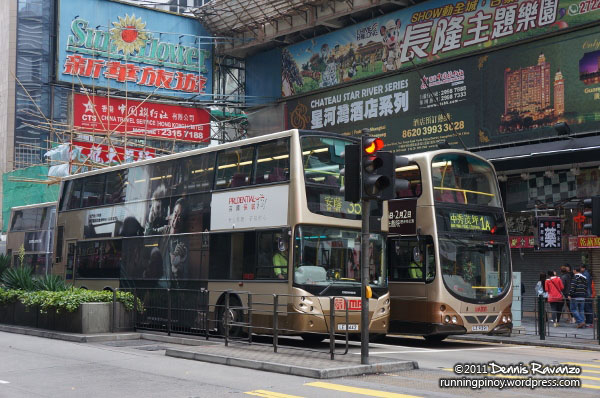 Since we don’t have much time to look for breakfast we ended up, again, with McDonald’s!  Well, it’s the same familiar fastfood, but it doesn’t mean that I have to eat the same familiar food.  McDonald’s Hong Kong have some food not available in the Philippines, and one of them is this Grilled Chicken Twisty Pasta.  Not bad but quite bland for my taste though.

It was also here where I brought my snack (a sandwich) for Disneyland.  Note though that Disneyland does not allow hamburgers inside the resort, but they do allow sandwiches and water.  After having breakfast and getting our takeouts, we were off for the MTR.

When I was a lot younger I really thought that a Disneyland castle was huge!  Yes, it’s still big but it wasn’t as big as I had expected.  Anyhow, crossing this landmark feature will take you to the resort’s attractions, and our first stop: Hong Kong Disneyland’s latest attraction, Toy Story Land.

I wasn’t exactly carrying a compact so I wasn’t able to bring along my camera for the ride, so no pictures during the ride but it was definitely awesome!

Riding Tip: If you intend to ride all the attractions in Toy Story Land, I advise that you start with Slinky Dog Spin and end with RC Racer.  We skipped Slinky and started with RC Racer, making the Parachute Drop feel dull.

After becoming toys ourselves in Toy Story Land, we were back to being big kids and went to our next stop: Philhar Magic.  Think of it as Mickey’s orchestra, and although it’s not live, it is in 4D!

After the show, it was lunchtime!  There are a lot of places to eat around Disneyland, but we were away from most of them so we just ate our snacks. Oh, I also got this:

At that time we did realize that a day is not enough to cover Disneyland, and since we were running out of time, we skipped the attractions with long lines to maximize our coverage.

Of course, a trip to Disneyland won’t be complete if we didn’t meet, greet, and have a picture with the stars of Disneyworld.

To further improve our “coverage,” we hopped onto Disneyland’s train, coming from Fantasy Land Station at the back of the resort.

We were still able to squeeze in a quick visit to some attractions, including an interactive encounter with Stitch (where we all found out that he’s my former cellmate :D).  Then it’s time for the Disneyland afternoon parade.  The entire resort stops for this afternoon highlight and we were fortunate enough to pick a good spot.

As much as we’d love to stay longer for the fireworks display, we simply can’t.  We had a ferry to catch to bring us back to Macau, so it was time for us to say goodbye to Hong Kong Disneyland.  A day is simply too short to explore the resort completely, but despite having only hours we were able to bring back our youthful years as we get to relive being kids inside Disneyland.

However short this Disneyland trip was, it fulfilled my childhood dream of going to Disneyland and meet Mickey, Minnie, Donald, and the rest of the gang.  For a day I got to relive being a kid (or felt like a kid) and I had so much fun so imagine what I was like for the kids we were with!  Yes, Disneyland is indeed a happy place: it’s like it’s Christmas there every day!