December 03, 2011: the day before our big race, Macau Galaxy Entertainment International Marathon, and also our first full day in Macau.  Our brains tell us we should rest, but our feet tell us otherwise so relatively early in the morning we were up for a tour. 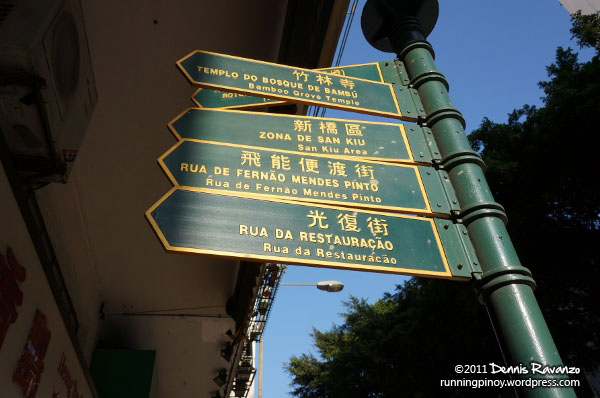 Unlike in Manila where there are a lot of shops open for breakfast, in Macau there’s only a handful open before 10AM.  Breakfast is a challenge in a country where English isn’t even a secondary language and writing in Latin alphabet isn’t mandatory, as we discovered for ourselves when we looked for an authentic-looking Macanese place to eat.  There weren’t much choice in our area so we settled with this little store which is reminiscent of any small Tapsi store in the Philippines.

Thankfully they have an “English” menu so we were able to pick something, which in the end turned out to be:

After having our “Macanese Macaroni” breakfast (with coffee and ham and cheese sandwich which I did not enjoy, and at MOP$23 I think is a ripoff) we were off to Macau’s landmark, the ruins of St. Paul, which is just walking distance from where we were.

The ruins of St. Paul refer to the façade of what was originally the Church of Mater Dei, and the ruins of St. Paul’s College, the first western-style university in the far east, which stood adjacent to the Church. The façade of carved stone was built from 1620 to 1627 under the direction of Italian Jesuit Carlo Spinola, and a fire in 1835 destroyed the college and the body of the Church.

From the ruins we headed straight towards the nearby Museu de Macau (Macau Museum) within the Fortaleza do Monte (Mount Fortress).

Mount Fortress is similar to Intramuros of Manila, only that the walls are on top of a mountain.  It was built between 1617 and 1626 and was the heart of the Macanese defense network.

From the ruins we headed forth to our lunch destination, the historic center of Macau, which contains Igreja da Sé (The Cathedral) and its square, Igreja de São Domingos (St. Dominic’s Church), and Largo do Senado (Senado Square) among others.

It was around lunchtime by the time we reached Senado Square, but in order to save time for our tour we just decided to eat from any of the nearby food shops.  Unfortunately, we were not able to find any authentic Macanese restaurant in the area so we ended up with Japanese food.

After filling our stomachs we’re off to the oldest temple in Macau, the A-Ma Temple.  This temple actually predates the city of Macau, and is dedicated to the goddess of seafarers, A-Ma.

Finally, after bathing in incense (and my camera in ash) we’re off to our last destination for the day, Estádio Campo Desportivo, also known as the Estádio de Macau (Macau Stadium), to claim our race kits for the Galaxy Entertainment Maratona Internacional de Macau (Macau Galaxy Entertainment International Marathon) the day after.  This is really it!

In actuality, doing a marathon never really sunk in to my head until the moment I was claiming my kit!  I admit I was a bit anxious because other than my 32K from Run United 3, I didn’t have much decent runs to prepare me for the race.  Well, there’s no turning back now!

Afterwards, we were on our way back to our hotel to have our last meals for the big day to follow.

I actually didn’t rest outright after dinner and instead went roaming in the immediate area of our hotel.

It was quite a long but fun day!  At the back of my head I was wishing I had rested (slept) more, but we can’t help it!  Weather was nice, sights were great, and the company was excellent.  Even if I wasn’t registered to run I’d be fine, but since I was, I hoped for the best and got as much rest for the big day ahead.