Visiting multiple churches during Holy Week, also known as Visita Iglesia, had become a tradition of mine for the last few years and this year I had the chance to revisit some of the most beautiful and revered churches in the country.  Here are the 14 churches I had visited this Lenten season.

My Visita Iglesia for 2016 started at the UST Chapel (Santisimo Rosario Parish).  There were hardly any people in the chapel at the time so I was able to pray in peace.  I chose to start here as it’s located near several churches.

These two churches are just right beside each other so it’s very convenient in terms of doing Visita Iglesia.  Unfortunately, St. Anthony Shrine was closed so I’m only able to enter Sampaloc Church this time.

The route of this year’s Visita Iglesia was highly influenced by my desire to return to one of the most beautiful churches I’ve ever seen, San Sebastian.  It may look pretty simple, until you step in—it’s Gothic theme makes it look like it’s somewhere in Europe and once you realize that the entire church is made of metal, you’d just be blown away.

5. Manila Abbey (Abbey of Our Lady of Montserrat)

This is another unique-looking church in Manila.  Unfortunately, it’s also closed when I passed by.

This is probably the newest and only modern-looking church among the ones I visited this year.

This is the closest church to the Malacañan Palace and despite its proximity it is interestingly pretty simple.  I just love how tranquil this area was when I visited.

This is one of the churches closest to my heart and one with a lot of memory.  I always go here whenever something big is about to come and to give thanks.

9. Santa Cruz Church (Our Lady of the Pillar Parish Church)

Not too far away from Quiapo is Santa Cruz and this church is located just across one of the entrances to the Manila Chinatown.

Located at the other end of Manila Chinatown is the Binondo Church.  It had recently gone some restoration works so it’s looks pretty nice now.

One of the most popular churches in the Philippines for both pilgrims and tourists alike is the Manila Cathedral.  A few popes have held masses here and it goes all the way back to the origins of Christianity in the Philippines.

This church is the longest-standing concrete structure in the Philippines celebrating 445 years this year!  It had survived countless typhoons and earthquakes throughout the centuries that toppled everything else, and it even survived World War II!

This would be my second time ever to visit Paco Park where St. Pancratius Chapel is located.  Paco Park was once a cemetery and this chapel is located in the middle of it.  It was unfortunate that the park was already closed when I got there so I can only take a picture from behind the gates.

14. Ermita Church (Archdiocesan Shrine of Our Lady of Guidance)

My last church for this Visita Iglesia is the Ermita Church.  The present church is relatively new as it was built after being destroyed during World War II, but it’s history goes back to the 16th century.  It currently houses the oldest Marian image in the Philippines.

My Visita Iglesia, all on foot, took a little over two hours and covered around 13.4 kilometers in some of the most interesting parts of the city of Manila.  Through the years I’ve been doing this, this is the first time that I had been able to put together all the churches I’ve always wanted to revisit.  I’ve also added a new one to the list so it’s quite fulfilling!

Note to self: use wide-angle lens next time to take pictures!  The clearing in front of the churches are not usually enough to fit the entire façade. 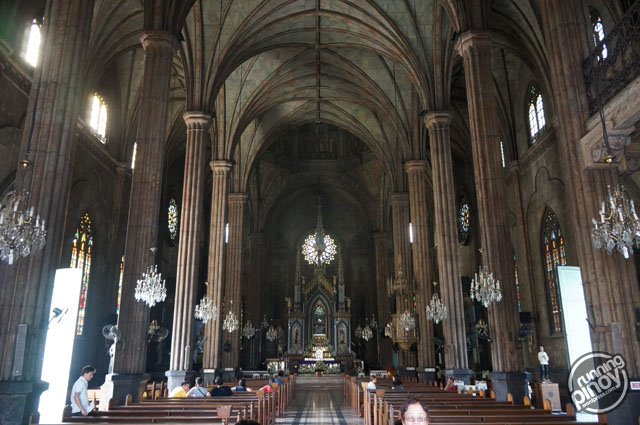