It started with sharing the event poster.  Before I knew it, I had actually agreed to participate!  And so this year I removed my inhibitions and joined the third edition of the Century Tuna Superbods Underpants Run!  Here’s my story from behind the scenes.

Century Tuna Superbods Underpants Run had become one of the most anticipated side events to the Century Tuna Ironman 70.3 Subic Bay for all the reasons that you can think of.  The past editions were by invitation only, but this year, Century Tuna opened it to the daring public and even added cash prizes to those who’d go the extra mile with their “costumes.”  And since I found someone (whom we’ll “hide” by the name, “Running Atom”) crazy enough to do it with, I gave in!

Parang gusto kong sumali haha #Repost @centurytunasuperbods with @repostapp ・・・ The Century Tuna Superbods: The Underpants Run returns to SUBIC BAY for its THIRD year on March 11, 2017! Inspired by the tradition at Kona, home of the renowned Ironman World Championship, Century Tuna continues with its own local tradition with the Superbods Underpants Run that it started in 2015 as a pre-race activity for the Century Tuna Ironman 70.3 This year, Century Tuna opens its extra fun pre-race tradition to EVERYONE and registration is for FREE. Individual runners can get the chance to win up to Php 15,000, while teams of four can win up to Php 20,000. Come in inspired costumes and you could bring home up to Php 15,000 or Php 20,000 if you’re a group. Interested to join Century Tuna Superbods: The Underpants Run? Register for free at the Century Tuna Booth at the Subic Bay Exhibition and Convention Center (SBECC) on March 10 or right before the race at the Subic Bay Yacht Club. Kick off starts at 9:30 AM on March 11 at the Subic Bay Yacht Club and will take participants through a scenic route along the Subic Bay Freeport Zone. See you there!

It seemed like the universe was conspiring for me to join this event as days later, I got an invite to cover the Century Tuna Ironman 70.3.  Perfect!  Now, what I need is something flashy to wear… 🤔

I have to admit that finding a “costume” for this event was a challenge for me.  I didn’t want to join the event just to join the event!  Sure, it could be as simple as going there, dropping your pants, and running with whatever underwear you’re wearing at the time—but I don’t want that.  I want to support the “fun” aspect of the event by doing my part.  And with that in mind, I also have to consider what is practical (I don’t want to bring a costume that may make me look like I’m doing the National Costume competition of Mr. World, or the like) and what I can comfortably and proudly wear (keeping within the legal “acceptable” limits 😜).

Due to time and budgetary constraints, I fell back onto something familiar and a cliché possibly: a superhero-inspired outfit!  And when it comes to superheroes, it’s almost a given for me to pick my favorite, Superman!  And with this event, I can stay true to superheroes wearing their underwear on the outside, albeit this time I’m only wearing the underwear! 🙃

And the day finally came.  Saying that I was nervous would be an understatement.  I arrived in a hurry at the starting area as the event I was covering prior to the Underpants Run finished much later than I had anticipated.  This meant I didn’t really have much time to prepare myself (emotionally) for the run and take decent photos of other participants as the area was already jam-packed!  Luckily, I quickly found my running buddy Alfredo “Running Atom” and that reduced my stress.  I took what little opportunity I had to take some shots of the participants before the race started and then prepared my outfit.  No more turning back now!  And after a few deep breaths, I invoked all the guts that I have and finally took my pants off… 🙈

After stripping to my undies, I convinced myself to believe that I was fully clothed so I won’t feel too anxious—and it worked!  There were a lot of other superbods that time so I’m not alone in baring a lot of skin.  I just enjoyed the moment, took some more photos here and there, and felt confident (with a heart?) under my skin.  It’s one of the few chances that I can proudly show off what I worked hard for in the gym!

And so the race started, and all I can think about is looking good for the photos!  The event would cover three kilometers and this would actually be my first ever 3K race!  I was taking photos with my mobile phone as I was running but unfortunately, I was unable to retrieve any of it as my phone would not survive the day when it got wet later that day on the beach. 😦  Anyway, this year’s Century Tuna Superbods Underpants Run saw so much more participants than last year and so there were so much more variety and creativity with the “costumes.”

Participants of underpants run in Subic 💪🏻👏

One of the perks of finishing Century Tuna Superbods Underpants Run is getting an awesome shirt, but due to the number of participants, it’s only limited to the first hundred or so finishers.  I’m usually indifferent with finisher’s shirts, but this time around I’m quite eager to get one!  So while keeping a smile on my face for the cameras, I was also consciously pacing myself to ensure I finish within that quota.  I was practically running on empty for the most part as I was already thirsty before the race began, and it was quite hot during the run, but I endured it all for the sake of that shirt and interestingly, I finished the 3K in under 15 minutes!  Along with the shirt that I proudly earned are some products from Century Tuna that would help me in maintaining my superbod! 😍

There are only a handful of races where watching at the finish line is actually interesting, and Century Tuna Superbods Underpants Run is one such event.  It’s a great opportunity to take more photos of the participants in their colorful outfits and have some quick chats.  And speaking of chats, I don’t know what happened but I just suddenly found myself having an interview with Dyan Castillejo, former tennis player and currently sports reporter for various TV shows of ABS-CBN, at the finish line with a few other finishers.  It’s interesting how this event turned from me feeling so anxious in running in my underpants to getting interviews (yes, plural) for national TV, still in my underpants!

This year’s Century Tuna Superbods Underpants Run ticked off one of those items in my running bucket list and is now one of my most memorable experiences.  Where else can you run in your underwear without the fear of getting arrested?  But on a more serious note, it actually made me realize that I can do more things than what my mind is telling me to be boundaries.  I’ve been keeping myself fit for the longest time but I haven’t really channeled my confidence until this event pushed me to be proud of my achievements.  I actually made this event my main motivation to eat healthy and workout consistently.  And now that it’s done and I was able to proudly show off the fruits of my labor, I’m more inspired to keep doing what I started and hopefully return next year with a better superbod! 💪 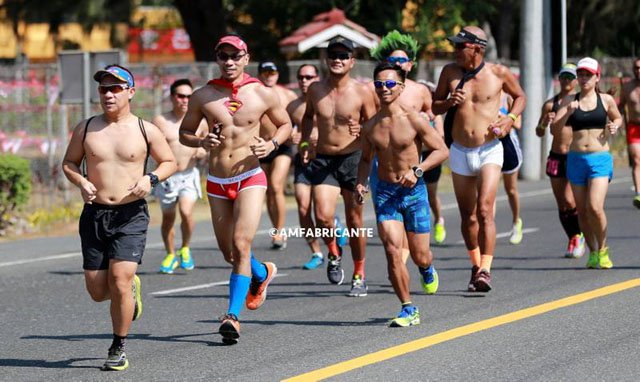