Looking back at my photos for 2014, I realized that there were quite a number of gastronomic adventures I wasn’t able to write about in this blog.  As the year draws to a close and it is still the season of eating, my yearend post might as well have to be about food! 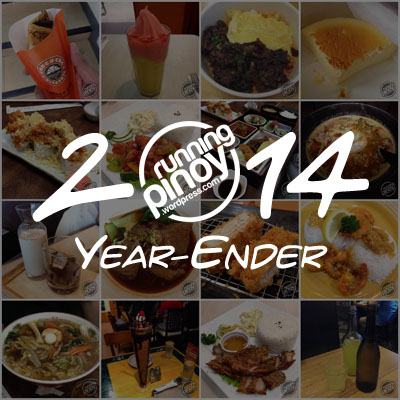 2014 opened on a high note for me as I spent the first weekend in Bohol and Cebu.  I may have not created dedicated posts about the wonderful places we’ve dined in while in there, but those were some of my all-time favorite spots.

Back in the Metro, one of the new places near me that I got to explore this year was the UP Town Center:

We were drawn into Red Onion Café because they offered unlimited refills of hand pulled noodles.

The soup of Red Onion Café’s noodles come in low, medium, and high levels of spiciness.  They’re pretty serious with their spice so even the low level could be a bit much for those with low tolerance.  The hand pulled noodles looked pretty rough, uneven, and sometimes a bit too wide, but overall the noodles with the spicy broth is pretty good!

A very popular restaurant from Cebu, Casa Verde, had finally made its way to Manila bringing along their famous dishes like Brian’s Ribs.

I’m not sure if it’s just me, but I find Brian’s Ribs in UP Town Center branch a bit hard and not as tasty as with those from Cebu.  But in case you’re not a fan of pork ribs, Casa Verde offers a lot of interesting options as alternative.

A few kilometers away is another foodie haven and one of the largest malls in the Philippines, SM North EDSA.  I have many favorite spots here but one of the most recent one that pleasantly surprised me was:

Orange House is located near the far end of the Annex building and you’d most likely miss it unless you’re actually going its way.  It had been there for quite a while but it was only recently that I noticed it.  At first I thought they offer only teas and shakes but I was surprised when I ordered their meals:

What surprised me with their meals is how beautiful their plating is.  It’s so pretty!  And the serving’s quite generous too, not to mention very affordable.  And aside from the looks, the taste is pretty good as well, including the sides.  They also have a huge selection of teas and juices that you could try with your meals.

Moving further down south is Makati where I spend most of my time, but sadly still I am a stranger to the many food spots (outside malls) around my radius.  Nonetheless, I do explore whenever I can:

This is probably the first blog-worthy place that I was able to eat in upon my return from my business trip abroad.  It had been some time so I can’t tell you accurately the names of these dishes.

In terms of ambiance, Nihonbashi Tei is pretty hard to beat because once inside you feel like you’re in Japan and the numerous Japanese patrons and Japanese-speaking waiters add to its overall charm.  In terms of food, they just look very pleasant and generally, the taste was good.  There were just some items that didn’t quite match my taste.

Another nice addition to the growing number of Tonkatsu place in the Metro, Saboten similarly have unlimited refills of side dishes like the competition but offers a wider selection of items.

Their food looks really nice and they taste really good.  Price is very much at par with the competition but the service could use a lot of improvement.  I had to wait quite a long time every time I asked for refills, and there weren’t that many customers when I was around!

Some of my other notable dining experience in the city for me this year was the Michelin star dim sum Tim Ho Wan, the quaint Little Tokyo, and the very nice vegetarian restaurant Wabi-Sabi.

Summer came early for me and it was well spent in Puerto Galera.  There were regrettably not that many interesting food spots there, but at least the beach was still good.

Bonifacio Global City should not be forgotten!  There are just a staggering number of great food finds here, but sadly I was only able to try a few:

Recovery Food became an instant favorite of mine the moment I tried their “Tapa de Morning.”

The only “issue” I have with Recovery Food is that their place is so small so they can only seat a limited number of customers at a time!  It’s good though that they’re open 24 hours so you may return during off-peak times.  Otherwise, their food are two-thumbs up!

I was having a pretty rough day when my feet brought me to this section of Burgos Circle in Bonifacio Global City.  Since everything then seemed to be going wrong so I thought Wrong Ramen was a fitting place.

Eating their ramen really seems so wrong, with all those generous serving of fat with every meat slice in their ramen, but it’s just so good you can’t help it!  How can something so “wrong” be so delicious?

SM Aura Premier also became one of my favorite food spots with the numerous new spots that opened this year including Ramen Nagi and Niu by Vikings.  Even their food court (named Food on Four) was not left behind:

I was looking for something interesting in SM Aura Premier’s food court when I stumbled upon Teppanyaki Brothers.  It got my attention as they prepare food in front of their customers like in some fancy restaurants, but you’re inside a food court!

SM Mall of Asia, formerly the largest mall in the Philippines, would not be left behind in terms of selection.  Many big names have branches here, but there are small interesting finds as well:

The Shrimp Shack is a good find among SM Mall of Asia’s numerous selection.

I thought that their shrimp was good and their price is pretty reasonable.  Plus, rice lovers would love the double cups of rice with an order.

Ortigas Center and its outlying areas must also be present in this list.  I’ve not been in this area that often but interesting finds like Silantro Fil-Mex Cantina makes it worth giving a closer look.  Mega Fashion Hall of SM Megamall is also home to great selections, including the maiden branches in the country of Tim Ho Wan and Ippudo, and this interesting café:

Curiosity led me to St. Marc Café and their “Choco Cro” (chocolate croissant) made me return.  They serve desserts that are also eye candy and of course being a café, their coffees are a must try!

A bit on the outskirts of Ortigas Center is The Capitol Commons and it is quickly becoming a great spot for food lovers with many new restaurants lining its main street and inside its mall.  I’ve only been here once, and my visit lead me to:

Burgers and Brewskies is just amazing!  By the name alone you can tell they have two specialitites: burgers and brews.  They have quite a huge selection of beers, cocktails, and everything in between!  And their burgers are just epic!

I was with my friends for a mini-reunion when I was here so I got to taste a pretty wide assortment of their selection.  Some of those we tried from the appetizers were the Onion Strings, B&B Nachos, Chili Cheese Fries and Kick-Ass Spuds.  I also got to try their strawberry mojito which was pretty interesting.  But we really went crazy with their Honey Garlic chicken wings!  For my main course, I went with what is called “Call the Nurse.”  It is one of the few burgers here in the Philippines that is actually thicker than my full bite!  It’s a really good burger and I love the bacon but it’s needlessly thick because it has seared mac and cheese in it.  The mac and cheese was good on its own and placing it in a burger is as silly as fries in a burger, but it still is a great burger nonetheless!  Will definitely be back to try some of their crazy burgers and beers!  (My bad, I was too busy socializing that I wasn’t able to take pictures other than the burger I ate!)

Finally, something close to home: SM City Fairview.  It had grown to be one of the best malls for me in terms of food selection, and one of its latest additions was one of my favorite recent finds:

One of my most recent “discovery” for the year would be Uncle Tetsu’s Cheesecake.  Their cheesecake is closer to a mamon (sponge cake) than the typical cheesecake but it has got to be the softest cake I’ve ever tried that the plastic knife they provided just glide in it when cutting slices, like hot knife through butter.

As a cheesecake, it is very light and it’s not so sweet so it’s perfect for those who are watching their intake.  But for those who are not, be wary as you may easily get carried away to eating an entire cake!  I actually ate half of the cake I bought and could probably eat one in one seating, given the chance.

Writing this post really made me hungry, especially the part when I was looking at the pictures of the food!  2014 had been a fulfilling year for me and as the New Year comes, I hope we all have more food and blessings for the coming year!

Have a safe, prosperous, and happy New Year everyone! 😀

For more food reviews and other related features, visit my Features page.