One of the weekends that I always look forward to each year is when Century Tuna Ironman is held.  It’s one of the few times in the year where world-class triathletes come to the country and show why they are called “elites” in the sport.  It’s also that time of the year where new Ironmen and Ironwomen are forged.  Here’s my recollection of the historic weekend when the Philippines hosted its first full-distance Ironman.

Due to unforeseen circumstances at work, I was forced to go to Subic late Friday night so I missed the activities of that day.  We arrived in our hotel early Saturday morning, just enough time to catch a few hours of sleep before our early morning call time for the Alaska Ironkids—another staple event of the Ironman weekend.

We were already at the Wow Recreation & Activity Center before sunrise to witness the last-minute preparation before the big event for the little ones.  And while everything was falling into their places, we were quickly finishing our breakfast for the long day ahead.

The Ironman weekend officially started when the Alaska Ironkids commenced.  Unlike past editions, this year’s event would be an aquathlon event (swim-run), and not a triathlon (swim-bike-run).  I don’t have official word from the organizers why this was so, but I assume it had to do with the big event the following day eating up a lot of space in the activity areas.  Nonetheless, the event remained as competitive as I remembered it to be, from the older to the younger kids.  I applaud the dedication these kids have with the sport!  Imagine going so far away from home, waking up so early, and then you have to swim in a cold pool for breakfast!

It was then a quick transition for us to cover the “traditional” Century Tuna Superbods: The Underpants Run (which I simply call, the underpants run).  For me, it was time to uncover as once again I decided to join this crazy run and experience it from a participant’s perspective.  You can read about it here.

Transitioning from a participant of the underpants run back to media upon crossing the finish line was a bit awkward as I was walking around and taking pictures, while still wearing only just briefs!  With that sweltering heat that day and sweat running through practically every corner of my body, it’s hard to think of wearing my clothes back, yet.  After a few minutes of shameless exposure and senses coming back, I realized that I have a finisher shirt I can wear to restore back some dignity and avoid soiling my regular shirt with sweat.  We went back to our hotel afterwards for our first downtime of the day.

Together with my roommates, we were able to explore some of the areas around our hotel on our downtime.  I thought that the beach was just in front of our hotel, but it turns out was a port so we were contented on just enjoying the sights and taking some pictures.  Afterwards, I took the rest of our downtime to enjoy our hotel’s pool to get my chlorine-fix.

That afternoon, we were back to Subic Bay Exhibition & Convention Center (SBECC) to cover the expo and the race briefing.  As always, there are tons to see at the expo and a lot of great items on sale.  There were also a lot of activities were visitors can join and possibly win some prizes.  The race briefing on the other hand was a bit more intimate as the speakers share their tips and actual experiences for the participants to leverage on.  It was also their rare opportunity to actually ask, in person, world-class athletes questions that were lingering on their minds.

The following day started even earlier as the big day was upon us.  Traffic was our main concern as you can imagine practically every participant would be bringing along their vehicle towards the starting area at Acea.  And upon arrival, I was just floored at the number of bikes in the Transition 1 area!  There were bikes as far as my eyes can see, even beyond!  The total value of all these bikes combined may probably be more than the annual income of a small province.

The Century Tuna Ironman event started with the 70.3 distance event.  There were no noted elites here as they were all in the full-distance category.  I guess you could say that it was the perfect opportunity for strong, non-elite, triathletes to finish with good rankings.  Unfortunately for me, I was unable to get into a good spot to take pictures when the 70.3 event started because our breakfast got delayed and I barely just finished eating then.

Fortunately, I was able to navigate my way through the crowd before the main event started.  I was prepared to be wet just to be able to find a good vantage point, but along the way I got much more than I bargained for when I stepped on the part of the beach that suddenly drops and I sunk to my waist.  Good thing all my gadgets remained unscathed and it was on to business!

The new orientation of the swim start was a challenge as you won’t get a good angle from dry land (unless your option is to take photos from behind).  And having a particularly long lens was a disadvantage as well for me as other photographers are constantly in my frame.  Nonetheless, I did what I can, occasionally taking shots from my iPhone X for particularly close scenes.

We headed towards Transition 1 next to catch some of the fast swimmers on their way to the bike leg.  We didn’t really have the leisure of time to stay due to traffic concerns, and it wasn’t long before we were on our way to Remy Field where Transition 2 is.  It felt like a long way but it was a pretty exciting one as we got to see the participants on their bikes.  Ironically, my most decent shots while we were in our van was taken with my phone and not my camera!

As you can imagine, a full-distance Ironman takes some time to finish even for the world’s fastest triathletes so we still afforded some downtime to get back into our hotel and have our lunch.  Afterwards, we were back at Remy Field to catch the 70.3 participants going into their run leg.

And then it rained.  And it really poured hard!  You just have to admire the amount of motivation the participants had during these extremely challenging situations.  They already accomplished a lot during this time, and they still have a lot to do to complete their mission, and nature isn’t exactly going with them.  I guess this event isn’t called an Ironman if you can’t get over these obstacles.

As the rained poured, the first finisher of the 70.3 arrived.

And then the rain stopped, and the sun went back with a vengeance!

It’s still a full-marathon distance for the run leg so it was a relative calm for us from the media as we wait for the winners.  It gave me some time to do my social media postings and have some snacks.  Later on, we heard updates that the leader is arriving soon, so I took my spot across the finish line and waited alongside photographers from digital and physical media.  We don’t really receive any updates on who was leading so we were clueless on who the winner would be, until he actually arrived…

On the women’s side, Liz Blatchford of Australia became the first female champion of Ironman Philippines.  Fellow Australian, Dimity Lee Duke, came in next with New Zealand’s Simone Maier completing the top three.

My coverage for the first full-distance Ironman in the Philippines ended later on this day so I did not have the opportunity to witness the formal awarding ceremonies.  Nonetheless, the experience that I brought home with me will stay long after the event concluded.  And that’s a wrap!

To all the finishers, Congratulations!  You all made history and contributed to the success of Ironman in the Philippines.

To the wonderful crew of Ogilvy & Mather, thank you so much for pampering us throughout the weekend and for the opportunity to witness an historic and world-class triathlon event!  Until next time! 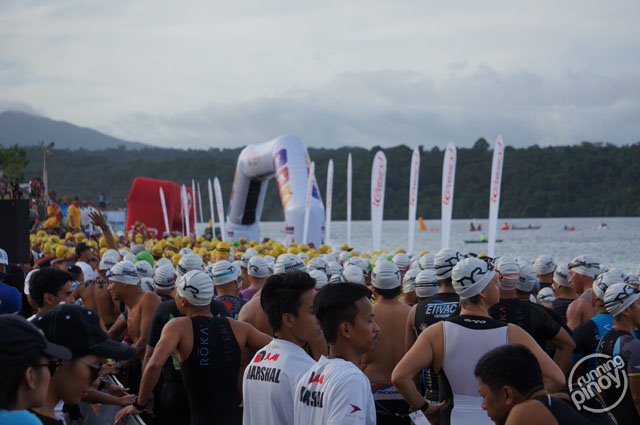