I seldom do a behind-the-scenes post about event launches, but for the recent launch of Powerade Ion4, I am willing to make an exemption because I had my first ever “podium-finish!” 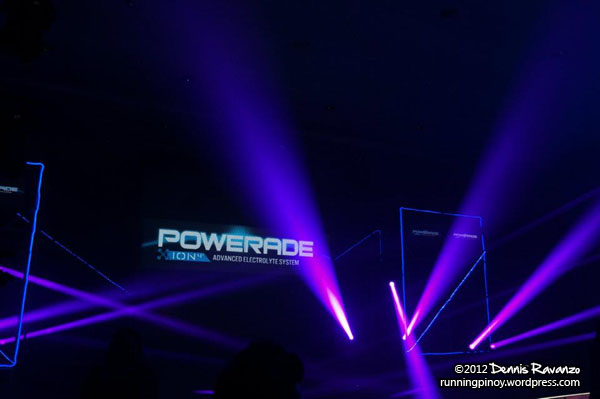 Last February 01, 2012 at the Whitespace Events Hall in Makati City, Powerade Ion4 was launched and with that attendees were encouraged to join any of the four activities in the area: basketball (hoops), football (hitting the target), biking (stationary), and of course running (on the treadmill).  Of course we were advised prior to the event to come in our sports attire to join in the planned activities.  Naturally it meant that we could get sweaty, and I guess that’s the best way to sample a sports drink—be tired, sweaty, and dehydrated.

When the host, Paolo Trillo, mentioned that there’d be some special prize for the winners in each activity, I thought why not gave it a try.  The majority of the crowd doesn’t look that much interested to participate so I thought might as well do it seriously to get some serious sweat going.  I was a bit pumped up at that time since I walked from the MRT station more than a kilometer away so I was already warm and ready to run.

I didn’t know how many “competitors” I’d be facing but when I saw the first name written on the list of participants for the treadmill (which would be my “batchmate”), I thought I heard it before and I think it sounded “elite.”  Of course even if the activity was just for fun, I was ready to give it my all since the distance to be covered was “merely” 800m, so it was game face on!

The treadmill used was really nice and sophisticated, and since I was “in the zone” I quickly pressed “16”—only for me to be informed later that it was the treadmill’s max speed already, and it was in miles per hour!  Hearing that and as I start to feel the treadmill speeding up I panicked a bit and pressed “8.”  While running with that intensity it was very difficult to do conversion from miles to kilometers so I was really clueless on my pace, and the treadmill does not respond fast enough with my adjustments—plus the tread was a bit loose so I was constantly losing traction.

Thank goodness it was “just” 800 meters (or two laps of a standard oval track) as I was running at practically 100% effort!  800m was the longest burst I had ever done during our speedworks way back in the days of Nike Running Clinic (2008) and this treadmill session beat my previous 800m time by a full 10 seconds, to finish in 3:01.  I was a bit dismayed because it was so close to being a sub-3 minute, and I knew I can do a sub-3 minute if not for my technical difficulties with the treadmill.  All I was hoping then was my time being “good enough.”  Fortunately, the succeeding participants were in it just for fun so I was a little confident, although I still wasn’t sure then how my treadmill batchmate did.

Much later on, the winners were announced.  I was so glad to hear that Vimz “Kulit Runner” took the crown for biking, and to my delight my name was called for running!  Unbelievable!  My first ever “podium-finish?!”  I admit I wasn’t really aiming for the prize (announced as a “Timex watch”), I was aiming for bragging rights! 😀

Later on after all the commotion subsided, I realized that my prize (along with other winners) is actually a women’s watch.  It’s nice and all and I’m not complaining, it’s just that I don’t have any sisters to give it to, hahaha.  And much later on after leaving the area, I realized that I lost my Casio watch during the commotion!  Retracing my tracks I remembered that I had left it on the treadmill!  Oh no!  Fate had once again played its tricks on me: a watch for a watch?  I had thought all that time that I placed my watch inside my bag, sigh.  Thank goodness it wasn’t my GF405 (which I don’t remove whenever I run on treadmills because it’s quite light) and that it wasn’t that expensive, but it was quite disappointing to lose a watch, especially that that watch is no longer sold.  Oh well, you win some, you lose some.  But at the end of the day, even if my bubble was burst, I can still proudly say that even for once, I had a “podium-finish!” 😀