For my last day in Cebu City, there’s not much to do but roam around and eat!  For this day I got to try some new restaurants, gone to a place that’s long due in my must-see list, and revisit an old favorite. 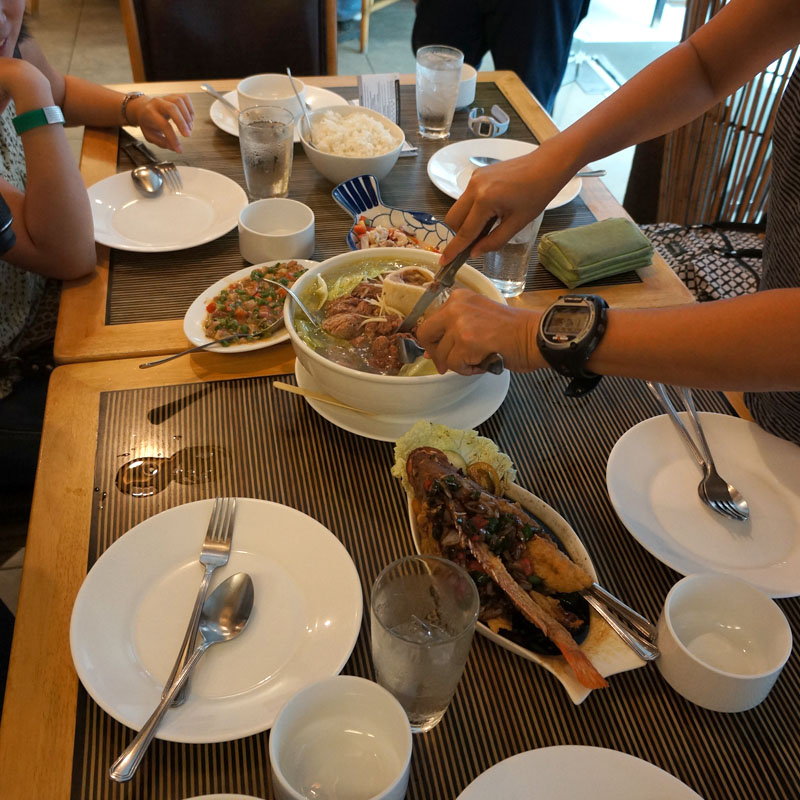 This is part of a series
① ② ③ ④

Morning was great as I got to eat breakfast with friends at a place I’ve never tried before, Ilaputi.  On my own I don’t usually try posh places because being from Manila I usually associate it with high prices—but not in Cebu!  Ilaputi is a nice looking restaurant located within Cebu IT Park which serves interesting versions of food that are not only really delicious, but also very reasonably priced.  Serving time though is a bit long, but it’s worth the wait.

Anyone who’s been to Cebu City would agree that a visit to this market is a must.  Why?  Simply because this is a good place to buy most, if not all, of your “pasalubong.”  The most common items bought from here are Danggit and dried mangoes.  There are also lots of other items here, some from nearby provinces.

Travel Tip: Make sure not to wear “fancy” clothes when visiting Tabo-an Market as the strong smell of dried goods stick to your clothes.  You may also consider taking a bath after. 🙂

I guess we took our time shopping from Tabo-an Market that it’s already lunch time when we were through!  We went back to our respective hotels to wash off the scent of the market and check out, and then met up at Abuhan’s third branch in Cebu IT Park.

Abuhan is a great place to eat in groups as food servings are big.  One of their specialties is their version of Pochero, but I could say that their fried Tilapia is my favorite.

One of my favorite pastry/dessert shops in Cebu City is La Marea, also located inside Cebu IT Park.  Being my last day in Cebu City, I won’t miss the chance to return and again taste their famous Brownie Cups which I so love.

After our dessert, it was time for us to part ways as my friends were off for their flights back to Manila, whereas I still have half a day with the city.  It would be such a waste to spend it in the mall so I decided to visit another place that is long due in my Cebu itinerary, the Taoist Temple.  I honestly don’t know where it was but since I have unlimited internet on my mobile, I found out that it was within “walking” range from Ayala Center.

Of course, anyone who knows where Ayala Center and Taoist Temple are would say it’s not, as I found out the hard way!  The Google result I found was not the one I was looking for, but since I’m already midway to the “real” temple I figured I might as well continue walking.  Thank goodness someone invented GPS and Google Maps!

As I near the vicinity of the Taoist Temple I realized something—maybe it wasn’t such a good idea!  I had just completed a full marathon a day earlier, and walking on some very steep hills isn’t an easy feat!  And did I mention that going to the temple requires climbing of stairs—a lot!  Since it was too late to turn back, might as well face the dreaded hills and stairs.

I realized that I was indeed lucky that I was able to enter the temple as had I been a few minutes late, it would’ve been already closed!  Anyways, going back still wasn’t an easy task as it was still quite some distance to Ayala Center.  Luckily there were jeepneys along the route that goes to Ayala Center sparing me some kilometers.

Since it was the season of Sinulog festival, there was a section in Ayala Center that showcased various Sto. Niño figurines from different eras, and elsewhere it was pretty much festive.  I really love this mall and I think that this is the best Ayala mall anywhere in the country (so much better than Greenbelt in my opinion) because of the huge assortment of restaurants you can find here, and also my gym has a branch here.  It is also located pretty close to Cebu IT Park which is also one of my favorite places in Cebu City.  Pretty convenient as well as far as public transportation is concerned so it was always my last stop before the airport whenever I’m in Cebu.

One of Cebu’s most famous Lechon in by CnT and one of its branches is located in Ayala Center.  You just have to be early though if you want to savor their Lechon as they usually get sold out quick, sometimes even before 6PM.

Dessert Factory is simply my favorite dessert shop (or as they put it, “restaurant and bakery”) in the Philippines!  They have a crazy huge menu of mouth-watering sweets and they also serve food with twists for those who aren’t yet ready for desserts.  This is just heaven for those with sweet tooth like myself!  I always make it a point to drop by at least once whenever I’m in Cebu.

Sadly all things come to an end, and of course my last point in Cebu would be Cebu-Mactan International Airport.  It’s probably as old as Manila’s Terminal 1, but even so it’s one of the best airports in the Philippines because it simply works!  There are lots of seats, good air conditioning, lots of shops for last minute shopping and food, free Wi-Fi, and even computers with internet connection for those without a laptop.

My only “hiccup” during this trip was the delayed flights that plagued all Manila-bound flights (both international and domestic) during that time.  My airline company (Cebu-Pacific) had already known that we’d be delayed by at least an hour, yet they waited a few minutes before our scheduled departure before they announced it!  They probably took cost-cutting way to seriously that they didn’t even bother calling or even sending SMS to their patrons and just waited for everyone to arrive in the airport.  I could’ve spent that extra hour at the gym you know—which would be much better than spending it aimlessly at the airport, and I would not have had to endure that hunger.  If it weren’t for my trusty netbook and the airport’s Wi-Fi, I wouldn’t have known what to do.

To the people of Cebu, thank you for your usual hospitality!  I’ll be back sooner than you think! 😀