When you least expect it, a race comes along that would just give you a weekend you won’t soon forget.  Such is the case of AyalaLand’s EXPLORAC: an invitational trail run which was unexpectedly free!  Here’s my long overdue story of my great weekend in Porac, Pampanga. 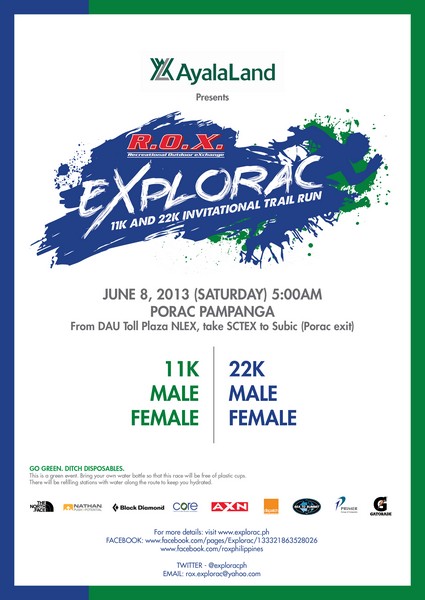 I first got to know about EXPLORAC from an email invite.  Back then the details were pretty much vague even until a few days before the actual day of the race, but I do know that it would be a trail run, and the first to be held in that area of Porac, Pampanga.  Being a trail lover I didn’t have second thoughts when I confirmed joining the event.

Fast forward to the night before race day: Metro Manila has been beleaguered with relentless thunderstorms for the past few days so it was a bit of a concern for us what kind of trails we’d experience in Porac.  Fortunately, Porac wasn’t having the wet weather of Metro Manila (as we figured when we arrived) so it was quite a relief.

I was quite surprised when we arrived in the starting line area—except for the event tents and a small structure, it was bare!  I knew that the event would be held in a new AyalaLand development, but I didn’t realize it was that new that there’s hardly anything!  But despite that AyalaLand had prepared a really nice restroom with showers for us.

The starting line was as simple as it can get with the finish line a few hundred meters away.  Because it was the first race to be held in the area, I intended to “maximize” my visit so I signed up for the 22K.  As the event also included a leg for bikers, the 22K event had to be cut short (as per last minute adjustments) to reduce faster bikers sharing the usually narrow trail routes with not so fast 22K runners.  We started at around 5:04AM.

The trails of Porac was very much interesting.  The sights were just beautiful and the terrain goes from flat to ridiculously steep!  It also goes from dry to about knee-high water.  Unfortunately, I was also running as “minimal” as I can get so I didn’t have room for a camera, and didn’t have pictures of its beautiful route.  I did have my Blackberry as my GPS tracker but I was only able to charge it halfway so I didn’t use its camera.

Some of what I consider to be highlights of this event are crossing the SCTEX from below, running on a river, and the mini-waterfalls (which was climbing, not running).  I expected myself to be slow, but many times it was because I had to pause and appreciate the beautiful sceneries around me.  And as predicted beforehand by the race director, the bikers eventually reached us a few kilometers before the finish line.  It was my first time to share the trails with bikers and I can say I’m not looking forward to doing it again as you have to give them way if you don’t want to get hurt and they’ll have you eating their dust (in this case, lahar, and yes, literally!).  I’m sure it’s the same way from their perspective as well, except for the dust.

At the finish line, top 50 finishers for both 11K and 22K were awarded finisher’s medals.  The activity area was just bustling with life with some fun activities and food from local concessionaires on sale.  It was just heaven for finishers like me who were already quite famished!  And while we’re nourishing ourselves, prizes were being given away while the awarding was being held.  Too bad I didn’t win anything from the raffle.

Because it’s a trail run with river crossings, no one was spared of the mud and lahar dust, but as mentioned earlier, AyalaLand was kind enough to provide everyone some really nice showers so we were able refresh ourselves before heading back to Manila.  The showers were unfortunately near the starting line so it was a few hundred meters walk back under the furious heat of Porac, but the baggage counter and our bus ride home was there so we really had to return back anyway.

Overall, it was an unexpectedly fun race.  The trails were anything but boring, and the added surprises were really fun.  I was even surprised that there were kilometer markers along the trail route which was a first for me in a trail race.  The 22K was just cut short to around 20K according to my GPS readings via (Endomondo on Blackberry) but it’s a free race and when I was running alongside speeding bikes, I was actually relieved!

I would like to thank AyalaLand and the Primer Group of Companies for this opportunity to run some new trails (for free) and for all the hospitality.  Truly, it was one wonderful weekend I won’t soon forget.