Let me start this post by applauding everyone who completed the recent Run United Philippine Marathon!  Congratulations!  Here’s my look back on this event that brought me back to running a full marathon after more than three years of hiatus!

It’s been more than three years since my last full marathon.  It’s something I always wanted to do at least once a year but lately had no time to train for.  42 kilometers is a very long distance to run, prepared or not!  So rather than be that runner who runs a full 42.195K without any preparation and let everything fall to chance, finish whenever, and risk health and even his own life needlessly, I opted to do half marathons (as a normal maximum) instead.  This went on until I realized that 2013 and 2014 had passed without adding another full marathon to my accomplishment.  2015 looked like it was headed the same way, until RUPM…

I’ve been a pacer for Run United 2015 since the first leg so doing it for the third time was a no brainer—but doing a full marathon required a lot of thinking on my behalf.  My last full marathon was way back January 2012 and I’ve not run any distance as long, and definitely wasn’t running as often and as fast as before.  Then I looked at Run United’s mantra: Exceed Yourself.  As a pacer for the past two legs, I should be the first one to practice what I preach!  And so instead of backing down and play safe, I took on the challenge to exceed myself—let’s get back to running that full marathon!

Now that the challenge of distance is accepted, the next question is time: what time do I intend to finish?  I mean, seriously and realistically.  As a pacer, you should lead runners in a pace that is comfortable for you.  Volunteering to pace everyone in a time that you complete only a few times in your life does not make sense, right?  But in my current state, what is this “comfortable” pace?

The answer came from my first ever full marathon pacer assignment: six hours finish time.  It is a finish time that I think is not so bad with an “easy” average pace (8:31/km).  You could say that 8:31/km is slow, but doing it non-stop for six hours is totally a different story.  And since many Filipino runners are obsessed with doing a full marathon without really doing their “homework,” even this “easy” pace is a challenge.  And that’s where the opportunity lies in me as a pacer.  Personally, I think that if you’re a normal person (with no disability or condition that would impair running), six hours is more than enough time to finish a reasonably flat marathon.  Finishing longer than this is too much toll on your body!  If you don’t see yourself finishing a marathon in under six hours, then don’t do it yet—there’s always that next great marathon you can join, and it gets better with a more decent time to brag!

Days quickly passed, and race day was upon us.  As much as I hate not getting any sleep before any race, I hate finishing late when the sun is high in the sky all the more!  So yeah, that 2AM gun start is a blessing.  Had it been later, our finish time would’ve been closer to noon!

Admittedly, setting a pace of 8:31/km is a bit of a challenge as it’s also not within my comfortable range.  It is too slow to be run and is actually about the pace of my powerwalk!  But since I feel like I’m insulting everyone running when I’m just walking, I resorted to running again with small steps.  It’s still a challenge as my steps are normally long, but it’s a sacrifice I have to take as a pacer.  I got used to it eventually, but at a price.

The adjustments my feet had to make to comply with our average pace took its toll on me as the race progressed.  One of the first to complain was my right knee long before halfway.  It felt like somebody hit it with a hammer.  It fortunately wasn’t bad enough to hinder me from running but I had to be very cautious with my run.  Then came this huge blister on top of my right foot.  It’s as big as a bubble on a standard bubble wrap and it’s just really annoying as it’s causing a lot of discomfort with every step.  It didn’t swell as we run as it probably kept popping.  Then eventually my lower back complained but the most serious one came last: my heels.

Seasoned runners may be familiar with plantar fasciitis, and it’s what I had to deal with for about the last third of the race.  I was really praying that it doesn’t go worse as I really felt like I’m going to tear that part of my foot, and I’m thankful that it didn’t.  Our easy pace matched with walk breaks helped to not aggravate the situation.

This is probably the best pacer duty I’ve had so far!  This is the first time that we had so many runners joining our group and they really followed our lead!  It’s like we had our own platoon!  To be frank, I’m quite surprised that there were so many runners on our group as I was expecting that, since RUPM is the last leg of the Run United series, many had trained well and were aiming for much faster finish times!  What surprised me more was that we actually overtook a lot of runners!  Given that, I’m proud that the folks that joined us took the challenge upon themselves to finish in six hours, not whenever comfortable.

The route is the biggest challenge of this race.  Sure, you can look at the race routes and to some extent figure out the elevation.  But unless you’re that familiar with all that route, there’d be a lot of surprises that await you.  Sure, 8:31/km sounds easy on paper, but applying it on the route was more challenging than I had anticipated.

The challenge started along Buendia Ave.  My GPS devices (a Garmin fēnix® 2 and iPhone 5) were all struggling to get an accurate reading as GPS signals keep bouncing off the tall buildings so we had to rely upon distance markers along the route.  Initially, I noticed that the distance markers were a bit off.  I can tell because we were exerting more effort than our average pace required of us, but we were arriving just around the expected time, e.g. we were running around 7:00/km but we didn’t arrive head of time in front of the distance marker.  At first it was a bit negligible, but then it became quite noticeable so in a struggle to keep to the time, our pace became slightly inconsistent, adjusting as necessary to meet the distance markers.  Then things got worse: distance markers disappeared!  I remember not seeing kilometer 13 marker and a lot of markers after that.  This made pacing a nightmare as you can’t do your manual calculation and you’d have to rely again on your corrupted GPS readings (hoping that it shows you data with acceptable accuracy).  This was also bad for the runners we were pacing as our speed was not as even as we had planned.  There goes that “easy” pace!

After all that struggle of running and walking, eventually we saw the finish line.  But not just yet, we still have two more kilometers to go!  This is one of those psychologically challenging routes that will burst you to tears if you’re already struggling to finish.  The finish line is already there, but you still have to run away more than a kilometer to a U-turn that you can’t even see.  Too close yet too far.  The runners we were pacing were actually all thanking us upon seeing the finish line, only to be disappointed that we’re still some distance away.

Exhausted as many of our runners were, they kept going with our lead.  We were still doing the run-walk approach and we were confident that we will finish ahead of time, but the challenge was keeping them motivated.  That long stretch going away from the finish line seemed never ending (as you only see the turnaround when you’re close).

As we turned it was still a full kilometer to the finished.  I mentioned that they can go ahead of us if they wanted to as the finish line is already ahead, but to my surprise nobody buckled and so we were, like a troop, marched on to the finish line together.  We were clapping as we approached the finish line as I think many of them were surprised that we were more than five minutes ahead of our target finish time!  They really exceeded themselves!  I can recall from one of our runners that he was only hoping to finish in 6:15:00, yet here we were crossing the finish line at 5:55:00.  Mission accomplished!

To everyone that we paced, thank you for joining our group and for sticking around!  Congratulations and good job!  I hope you were not disappointed that we finished ahead of time and I hope that you don’t stop pursuing faster times. 🙂

Kudos as well to my co-pacers Allan “Last Man Standing” and Daves “barefootdaves” for the great job!

Full marathon finishers had their own red carpet treatment inside One Esplanade.  Here they were treated to some photo opportunities to save this proud moment for posterity.  It is also air conditioned so it’s a nice way to cool down.  They were also treated to some products and services from sponsors that made me a bit envious, hehe 😀 (we pacers don’t enjoy the finisher’s perks like shirts, loot bags, etc., not even any monetary compensation—just a finisher’s medal, some breakfast, and the satisfaction of being able to help fellow runners).

This was Run United Philippine Marathon 2015 for me.  I hope it was as memorable for you as it was with me.  If you’re one of the runners that joined our group, let us know how we fared!  To those who ran throughout the Run United 2015 series, please share your experience as to motivate future runners that will be on the same shoe as you were.  Were you able to exceed yourself?  Let us know! 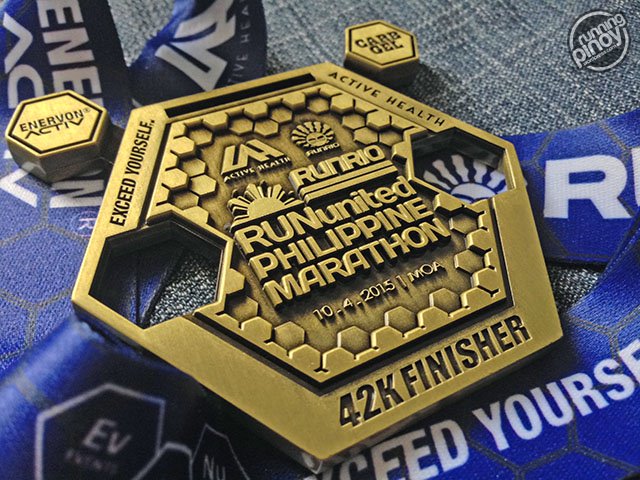