(Update: This product has been discontinued) To those running long distances (usually half marathons or longer) energy gels serve as a very convenient source of nutrition: they don’t spoil easily, comes in a minimal packaging, and provide an energy boost without needing to chew.  All brands available in the local market is imported, until now, as Unilab introduced the first Philippine-made energy gel simply known as Active Health Sports Gel. 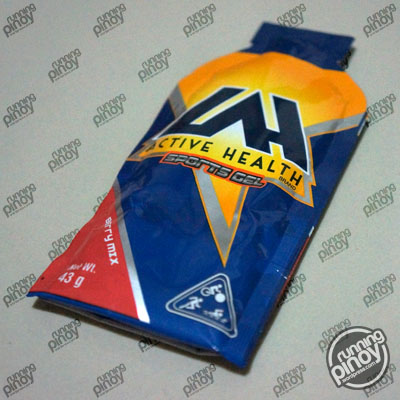 To those who haven’t used an energy gel before, it complements sports drinks during long runs as it is more “solid” but not so much that you’d need to chew.  I usually use it for runs that are more than an hour because I get hungry and don’t always have room to bring a banana or similar food.  Sports drinks help in replenishing nutrients but since it is liquid it doesn’t really do much when you get hungry, and that’s where energy gels come in perfectly.

Energy gels are recommended to be taken 15 minutes before you start and every 30-45 minutes henceforth, but that varies upon personal preferences.  You can take it on its own but I suggest drinking water afterwards to clean your palate.  If you think you have a sensitive stomach, make sure to try out your energy gel first before using it in an actual race.

There are a lot of energy gel flavors available depending on the brand (probably even more than your baristas in the coffee house can offer) so for those very long runs you can bring a variety of flavors to avoid taste fatigue.  Personally, I prefer to alternate between those with caffeine and those without.  As per Active Health Sports Gel, only Berry Mix flavor (no caffeine) is currently available but more flavors are soon to come.

Before we dig deep into the review, here are some product details about Active Health Sports Gel provided by United Laboratories, Inc. (Unilab):

Variance Against Other Brands:

Simply put, Active Health Sports Gel’s approach is to provide more carbohydrates (vs. other brands) which is your fuel when you run, and offer it as “complex” which isn’t as easily burned as “simple” ones (like coal vs. paper, as per Unilab’s analogy).  Their consistency is also more fluid than other brands coming close to syrup than gels.

PowerGel (by PowerBar) was the first energy gel that I’ve ever used stemming from curiosity while I was shopping in a sports shop in downtown Columbus, Ohio.  Back then energy gels were practically inexistent in the country so I tried it out the first chance I got, and the rest was history.  Unfortunately, PowerGel still isn’t easily available in the Philippines so I had to change brands.  GU on the other hand is perhaps the most widely available brand in the country, and it also had the most variants so it was my obvious choice.  These two brands are currently my benchmarks, let’s see how Active Health Sports Gel fares:

To summarize, Active Health Sports Gel has the most carbohydrates among the three brands (information on its sugar content is unavailable), thus also the most calories.  There are no recommended daily values in the US for potassium (based on the packaging) but it has the most for this nutrient too.  Interestingly though it has the least amount of sodium among the three and by quite a huge margin!  How that translates into the real world is the subject of my test run.

Since it isn’t advisable to take anything new or unfamiliar on race day, you should take the time to test anything you plan to use (or in this case, eat) ahead of time.  Testing an energy gel isn’t that easy though as you have to exhaust time and effort to figure out if it works and doesn’t ruin your stomach.  For the sake of this test, a minimum of two-hour run is in order.  Just thinking about it is already tiring!

About an hour into my run, I took my first pack of Active Health Sports Gel.  My first impressions were quite positive.  The packet is just as easily opened as with those of the competition, but with flavor called “Berry Mix” I was a bit worried that it might taste weird.  To my pleasant surprise it was actually quite nice and I’m sure the majority won’t have any issues in this regard.

The consistency was also another positive.  It was more “fluid” than the usual so you can easily ingest it without any other liquid.  And since it wasn’t too sweet you won’t really crave for water afterwards, but for the sake of staying hydrated, I still suggest that you take some liquids after.

Between my first and second pack (about an hour apart), despite its syrup consistency Active Health Sports Gel managed to prevent me from getting hungry as I normally would without any energy gels or relying solely on sports drinks.  That could be the carbohydrates that I was burning off from the gel.

* Details of this test run can be found here 🙂

Being the first energy gel from Unilab, I’d say that they’re on a good track.  Here are the points that I liked:

I like the unique syrup consistency together with the not so sweet flavor as it doesn’t leave my palate sticky and craving for water, and I like that it can keep my hunger during long runs at bay with its supply of carbohydrates.

On the other hand, here is one thing that I think Active Health Sports Gel fell short:

With currently only one option, the Berry Mix flavor may not appeal to everyone despite tasting surprisingly good (for a “Berry Mix” that is).  With that, if I were to suggest anything about their future variants it would be variants that are:

If I could also suggest the addition of the sugar content per packet for those watching their sugar intake, that would be great!

Overall, I welcome Active Health Sports Gel into the market as it provides an alternative to the usual plethora of energy gels.  I liked that they didn’t just join the bandwagon but instead rethought of their formula from scratch.  Their approach of having more complex carbohydrates and less sodium is quite unique, and a single test run won’t be conclusive enough for me to say if it’s better or worse than the competition.  With this test run my first impressions of Active Health Sports Gel was pretty good, and I encourage everyone to give it a try as well so we can provide feedback to Unilab about how we like our energy gels.

To those who can’t wait to try the first Philippine-made energy gel, I’m glad to tell you that the Active Health Sports Gel will be having its public debut on the forthcoming Run United Philippine Marathon!  If you’re joining this event watch out for it as something tells me that there’d be some free samples to go around so you too can try it.  No official statements yet as per in-store availability and pricing, but I’m hoping that the “introductory price” is lower than the “imports.”

Had the chance to try it?  How was it?  Feel free to share your thoughts on the comments below. 🙂